Free-flowing non-narrative short from the writer and director of 2018’s ‘Solar Walk’ traverses the universe in three separate chapters, depicting an ensemble cast of celestial bodies and otherworldly creatures in various states of attraction toward one another. 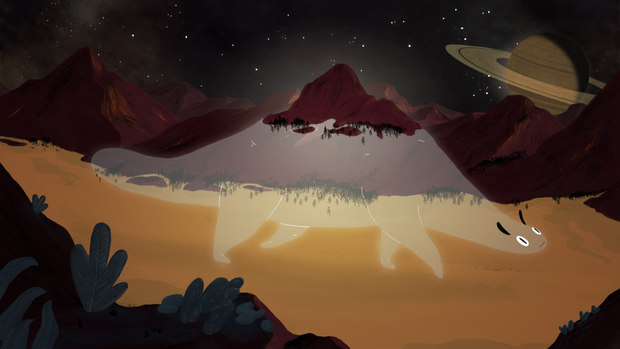 The free-flowing non-narrative short, which screened in competition at the 2016 Berlin International Film Festival and was nominated for the European Film Awards in 2017, traverses the universe in three separate chapters, depicting an ensemble cast of celestial bodies and otherworldly creatures in various states of attraction toward one another.

According to Busci, the nearly 15-minute LOVE originated as an experiment in wanting to “make a movie about love, but not to portray it through a couple of characters, but more in general through atmosphere, and a tactile environment that would give the audience a sort of sensation for the feeling of longing, love and solitude.”

Busci’s much-lauded 2018 short film, Solar Walk, continues to make waves on the international festival circuit. Winner of the Short Film Award at the 2018 Berlinale, the cosmic ode to creation was nominated for an Annie Award for Best Animated Short, and also won grand prizes at the 2018 Ottawa, Bucheon, and New Chitose Airport animation festivals. It was also selected to compete at the upcoming 2019 GLAS Animation Festival.

Watch LOVE in the player below:

Want more? Learn how Solar Walk was made in AWN’s exclusive interview with Bucsi at FMX 2018: