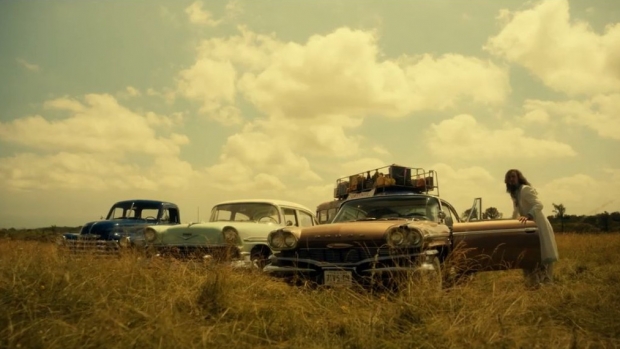 Pixomondo's Toronto branch was lead facility on the project. According to Head of 2D Eric Covello, the studio’s VFX work, produced with a team of 35 artists over a period of five months, involved lots of set extensions, background replacements, crowd duplication, and some CGFX destruction. All told, Pixomondo delivered 124 shots in six sequences across five episodes.

According to Covello, their main sequence involved a fight in the Mexican consulate. “This involved a carefully planned out 3D recreation and extension of the practical hallway. The on-set hallway was made up of 3 pieces that could be rearranged so the length of the hallway varied from shot to shot in the sequence. We had to create the hallway in a modular way to be able to maintain a consistent length throughout the sequence. It was a great exercise in planning and sequence management.”

The team also delivered the training ground sequence where the handler was shooting at a young Lila. “The plates were shot on a bright sunny day, but the look needed to be dark, smoky and overcast,” Covello notes. “This required a lot of roto, relighting and color correction to achieve the right look.” “One of the most interesting sequences we worked on was the fight in Sissy’s house where Luther is thrown through the wall,” Covello continues. “The plate had an already broken house. We were responsible for recreating the clean house and destroying it as Luther breaks though.” Pixomondo’s biggest challenge on the project was delivering high quality shots on a relatively short timeline, relying mostly on 2D techniques to deliver on time and on budget. “For example, in the training ground sequence, there was no budget for CGFX and as such, we had to use only 2D elements to create a very smoky and hazy environment riddled with bullet hits, muzzle flashes, and explosions,” Covello explains. “In another sequence, we had to create backgrounds for behind Klaus’ bus as it travelled down a street. The foreground bus elements had large camera moves with huge perspective changes. The background plates for these shots were very simple by comparison and required a lot of work to get them to match the foreground. We accomplished this by stitching together multiple plates and takes and reprojecting moving trees to creates backgrounds that matched the movements and perspective of the foreground plates.”

“Thankfully,” Covello concludes, “we had a very talented team and some very technically minded compositors who were able to pull off the complex shots and made them look great.”