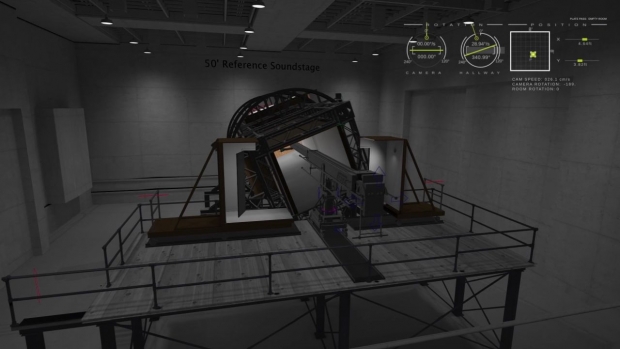 In a sequence from the first episode, at a house party, the show’s heroine, Rue, emerges from a bathroom in a drug induced state. She’s done some cocaine after having already gotten high various drugs. As she walks out of the bathroom, the entire hallway begins to spin, without her, begging the question, “Is this really happening? Is she attached to the ground with these partygoers defying gravity or is it the other way around?”

In describing the rotating hallway sequence, David Van Dyke, the show’s overall VFX supervisor, tells AWN, “There was a tremendous amount of planning that went into developing our rotating room effect. It began with initial discussions about story and how [show creator and executive producer] Sam [Levinson] wanted to convey Rue's experience to the viewer. It was important to Sam that the shot feel very physical and photographic. So, as a VFX department, it was our job to lead the technical conversation and testing with the other departments. It began with Sam's conceptual vision, which was quickly put into simulated practice with extensive previsualization based on real life physics. These previsualization simulations incorporated the actual gear we needed to use, the dimensions of the set, the actors who would be in the physical set on the day of the shoot, the weight of the set in relation to the power of the motor that would be needed to rotate the actual set, and then the working model to incorporate our motion capture elements.”

Once they had a working model in previs of how the shot would be accomplished, they had to build both sets – the rotating hero set and the static motion-capture set - based on the previs models. “On the day of the actual shoot, we had to put the simulated elements developed in previsualization into practice,” Van Dyke continues. “This consisted of the hero plate shot first and then the motion-capture day shot one week later based on the camera move of the hero plate. Once we had all those elements, we had to track and composite the motion capture elements into the hero plate.”

Pixomondo VFX supervisor, multiple Emmy Award-nominated Nhat Phong Tran, explains that his team was involved in both planning and execution of the shot where series creatives wanted to show how the heroine felt after taking drugs at a party. “In particular, they were thinking of the idea that she would be walking down a hallway where other party goers are, but the hallway, including the people, would spin around her, causing her to actually walk up the walls to the ceiling and back down,” he says. “This involved intensive technical planning and communication with other departments. Since the only way to shoot this was to split out the shoot to two different sets on different days, we utilized motion control for which data had to be prepared.” According to Van Dyke, the production process took months to complete. “It's a complicated effect that took many initial conversations to decide what we wanted to achieve vs. what was physically possible,” he says. “We undertook an extensive previsualization process that included the VFX Department, the team at Pixomondo and all of the Euphoria Department heads involved in the physical production. Once past the previsualization phase, the physical production team had to build and execute the shoot, which consisted of the following departments: AD, Camera, Art, Construction, Special Effects, Stunts, Wardrobe, Hair & Makeup, Grip, Lighting, Production and Visual Effects.”

Tran adds that it took “months to complete this starting from initial thoughts, to problem solving, to solution implementation and final execution.” The sequence went from shoot, to post and through editorial, then back to the VFX team to complete the final composite. “I don't have an exact number,” Van Dyke says, “but it was easily over 100 people involved in this one very complicated effect.”

For Van Dyke, the biggest challenge was figuring out the real-world physics in pre-production to make the effect work in camera. “A tremendous amount of money and energy were put into the physical shoot before it happened,” he says. “Tons of planning, testing and rehearsing. If that was off or done incorrectly the entire effect would have failed, which it didn't. Everyone thinks VFX is only about post-production. What people don't realize is that the best effects start from good planning and hard work in pre-production with well executed photography in production. It's what sets up the VFX so they look the best in post.”