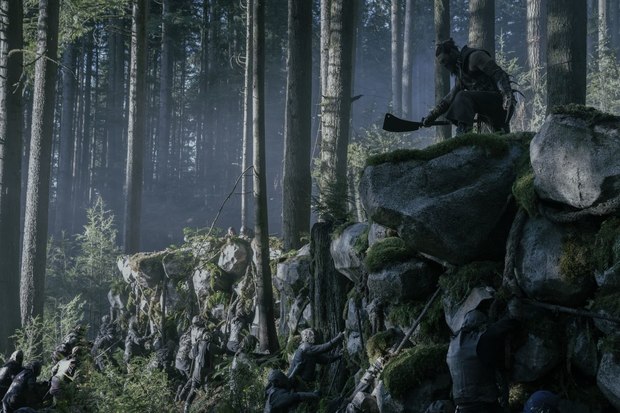 Leading design company, Pixomondo, has shared some of their latest work: a rock wall avalanche from Episode 1 of the new Apple TV streaming series, See. The show, which takes place in the distant future after a deadly virus decimates humankind, leaving all survivors blind, stars Jason Momoa and Alfre Woodard.

In the inaugural episode, we witness a giant battle of two of the warring tribes when an army of Witchfinders attacks the village of Alkenny. After a bloody and gruesome fight, Baba Voss (Momoa) is forced to unleash the final line of defense before his tribe is overrun; a rock wall avalanche down the side of the mountainside.

To create the sequence, a team at Pixomondo’s Vancouver division, led by VFX supervisor Matthew Welford and VFX producer Adam Harrison, first scanned the shoot location’s actual hillside before practical photography began. According to Welford, next, they recreated a fully CG rock wall made up of thousands of individual rocks, mud, plates and debris. FX simulation was used to accurately recreate how those rocks – which had been scanned earlier – would actually roll down the hillside. It was necessary to make sure the rocks interacted with both the world around them, and actors within the scene, to make the final shots feel as realistic as possible. The final shots comprised of CGI Rocks, digital humans, digital plants, digital debris all integrated with the live-action actors and plates shot on location.