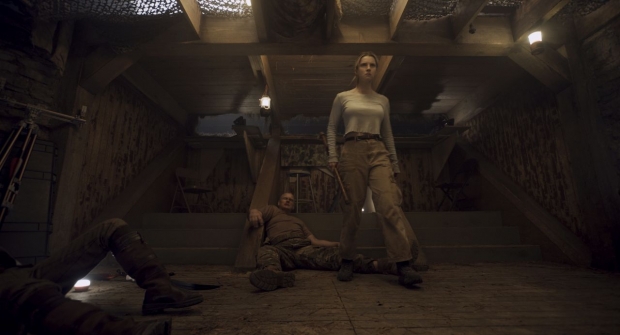 The film is set in the shadow of a dark internet conspiracy theory, where a group of elites gathers for the very first time at a remote Manor House to hunt ordinary Americans for sport. But the elites’ master plan gets derailed because one of The Hunted knows The Hunters’ game better than they do. She turns the tables on the killers, picking them off, one by one, as she makes her way toward the mysterious woman at the center of it all.

The Pixomondo team was led by VFX supervisor Johnny Gibson from PXO Los Angeles, who spent considerable time on set during filming, and Edward Hawkins, working from PXO Vancouver, who ended up going on set in Louisiana for reshoots…during the hurricane. All told, they finaled 236 shots, working on the film for three months.

Discussing the scope of their VFX work, Gibson says, “Our bread and butter [on the film] was blood and gore, wounds, and muzzle flashes, which we shot many elements for on the VFX element shoot day.  We used a cornucopia of classic techniques. We had lot of safety gear wire paint outs and set extensions. All the flying arrows were digital, like where actor Christopher Berry was charging through the forest shooting his hand cannon and getting shot.  We prepped for some face replacements and complex in-shot camera hookups.  We also had a couple of big hero practical FX composites. One was where Spectrum FX loaded all the explosives they had left at the end of the shoot into one big pile of stage blood and latex guts, and set it off against the greenscreen; that was used in the mine explosion shots that tear actress Sylvia Crim in half just before she lands on the spikes in the pit.  We also shot pyro on the Pit location as well.  It was awesome pyro!”

“We also built a digital private jet,” he adds. “The jet interior was shot on a bluescreen stage. How did we add a runway and private jet to a small mansion's back yard?  We erected a giant bluescreen to back-cover the foreground foliage from the camera's perspective and treated the rest as classic digital set extension with a CG private jet.”

Work was also needed to clean up a supposedly pristine grassy field that had been muddied by torrential downpours. “The field just north of New Orleans where we shot was getting doused with rain every other day, being hurricane season,” Gibson continues. “It was impossible to hide all the muddy tracks, so Ed had to do it digitally.” “The bulk of the shots were cable rig and set clean up, particularly in the fight scene at the end of the movie,” Hawkins chimes in. “We also did gore/blood addition, gun muzzle flashes and the usual odd assortment of one-off shots that pop up in the course of shooting. The only big CG was the addition of a private jet and landing strip that involved the full gamut of CG plane build, bluescreen, 3D track, and set extensions.”

According to Hawkins, on a shoot like The Hunt, researching gunshots and knife wounds brings you to one of two places: too unpleasant to consider recreating, or too mundane and unspectacular to tell the story of that moment on-screen. “It all generally comes back to: what does the audience expect to see in a movie like this? Looking at the best cinema moments of the past, in movies when someone gets shot in the head, we expect to see an explosion of blood, ideally thrown against a wall for extra impact. It is part of our shared language of cinema. In The Hunt, it was very much about surprising the audience. Just when they think they know who the main protagonist of the film is... they get shot or blown up or impaled or some combination of the three. We would create something spectacular and shocking, then get asked to push it a bit further: bigger and bloodier, but without it becoming comical.”

“We did want to push and force it to be a little bit more in your face, so that it was a hint more visceral than you would shoot naturally,” Gibson reveals. “I'm personally a little squeamish so I tried to stay out of the bloody dailies.  I think Ed and his team did a great job on that stuff because I practically fainted when I saw the finals for actor Jason Kirkpatrick getting stabbed in the neck with the neck cut together!” As far as handling gunshots, Gibson goes on to explain it’s about the timing and muzzle flash. “Adding quarter load blanks always helps the performers with recoil and sometimes makes a good muzzle flash, but the flash is extremely short and half of the time it occurs between frame exposures,” he shares. “They are also hard to see in daylight. So, to get them, we shoot the same gun in a dark environment and capture the flash from a few different angles.  Then we can go back and add them where we need more impact.  And more subtly, sometimes we drop a frame or two around the recoil just to make the weapon look more powerful.”

Gibson also notes that the team provided quite a bit of 2D manipulation for a number of the more elaborate fight scenes. “The big fights were also our bread and butter,” he says. “There were some interesting problems to solve. Like how did we bounce a stunt performer off a burning fireplace?  We shot the stunt performer against green crash pads and then shot a wide clean plate of the fireplace burning; then Ed's team tracked and massaged them to work together.  How did we add a runway and private jet to a small mansion's back yard?  We erected a giant bluescreen to back-cover the foreground foliage from the camera's perspective and treated the rest as classic digital set extension with a CG private jet.  How did we not kill people during knife fights and stabbing?  We took the blade off, shot the action, shot a reference of the real blade in the same lighting and added it later in either 2D or CGI.”

For Hawkins, the single biggest challenge on the film was putting the CG plane into the final shot. “That involved every part of the VFX pipeline; 3D tracking, matte painting, 3D modeling and lighting, and some very patient and complex compositing to pull everything together.” For Gibson, it was the weather. “We were at the mercy of the Louisiana rain,” he states. “The First AD, Lars Winther, did an incredible job of giving the crew shooting options for wet days, but more than half of the time we had to collect tracking/matchmove data and reference data under poorly lit plastic tarps and in wet environments.  It was the opposite of the ideal circumstances we are used to.  It was a constant struggle to get between the main shooting stage and the SFX shooting stage on the FX days.  About half the time there was an inch of water on surfaces you had no choice but to step in. You couldn't predict the flooding.  I packed my rain boots in the car one day, hopped out to put them on in the crew parking lot, and realized my feet were already entirely submerged in rainwater.  What a day! Mud was a problem too.  It got in all the equipment.  We had to clean all the gear every other night in addition to the daily archival and documentation processes. But I wouldn't trade the experience for the world.”