Award-winning indie animator of ‘Puppet’ and ‘Blank on Blank’ shares his thought-provoking 2018 short about the process and danger of conformity. 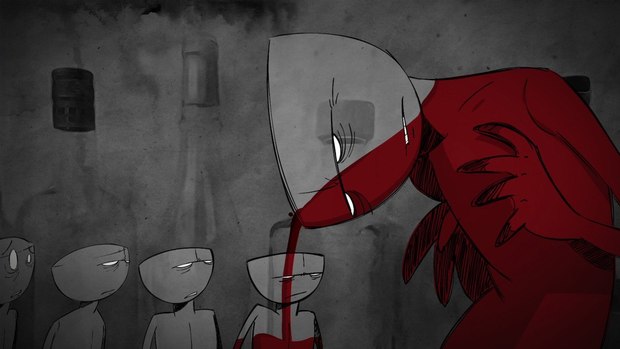 The director’s description of Pour 585:

In a dystopian world populated by animated wine glasses, a timid character tries to escape an important rite of passage. When he disrupts the standard pouring ritual, he discovers that individuality comes with a price. Pour 585 is a cautionary tale about the dangers of conformity that uses metaphor to illustrate the process of indoctrination.

Smith, who started directing on MTV’s Daria and Downtown back in 2000, served as animation director on the PBS series Blank on Blank, an entertaining set of visual interpretations of audio interviews with famous artists, actors and musicians such as Kurt Cobain, Leonard Cohen and Philip Seymour Hoffman.

In a 2006 interview with AWN’s Dr. Toon, Smith, bemoaning the inherent difficulties in the studio development system, in a prescient career assessment that belies his tremendously productive decade plus of independent animation production that soon followed, said, “Yeah! I do want to pitch shows, but what am I going to pitch a show about? A kid’s show? I don’t know. I have ideas, but they end up being too violent or too artsy. I had an idea for a pantomime show, but who’s going to do that? Cartoon Network, the shows they make, that’s just not how I’d do films. I guess that’s why I don’t pitch; nobody would want it!”

The studio system’s loss has certainly been the indie world’s gain. Many of Smith’s films can be seen on Vimeo - read more about his impressive body of work at Blend Films Animation.