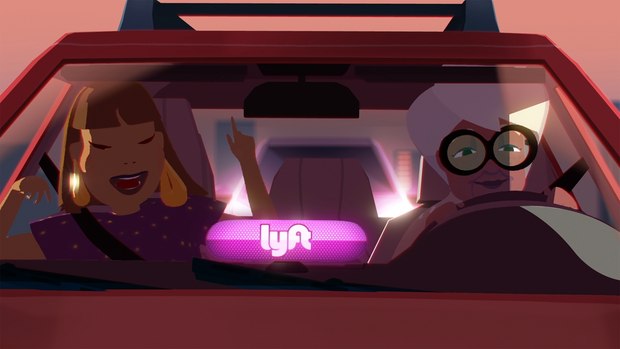 Unveiled today as part of Lyft Driver Appreciation Day, June debuted at “pink carpet” events held in Los Angeles and Chicago and is now available to watch online. The company will also match tips each driver receives for the day as a thank you to its 315,000 drivers.

Following the inspiring story of a lonely older woman living in Chicago who finds new purpose as a Lyft driver, June came from an idea by Lyft creative director Ricardo Viramontes, based on the experiences of real Lyft drivers and passengers.

“When we looked at anecdotes from drivers and passengers, the common thread was how people connected,” Kahrs recounted at a special preview screening of the film on Monday night at iPic Theaters in Westwood. “That became the real story.”

The story began “as a very loose sketch of an idea,” Kahrs said. “Could we tell the story of a woman who starts driving for Lyft, and it changes her life and transforms her connection to her community?”

For Viramontes, animation always felt like the “right” medium to tell the story. “A lot of what happens in the car is serendipitous and special for each driver and passenger, and with live-action it can be hard to believe it’s true,” he said during the Q&A following the screening. “There’s something really magical about animation that allows you to really get the core essence of the story.”

Kahrs credits the unique look of June to Dart’s design. “I got really excited when I saw what Kevin had been doing over the last year or so,” he said. “It was the perfect thing at the perfect time to stumble across. He has this style that really doesn’t resemble hand-drawn. It feels more like a moving illustration. There’s a flatness to it, but there’s also photographic dimensionality.”