Winner of the 2020 Art Fund Museum of the Year award, Gairloch Museum presents the Scottish fairy tale ‘The Gille Dubh: The Last of the Fairies,’ inspired by the art of Abe Locke. 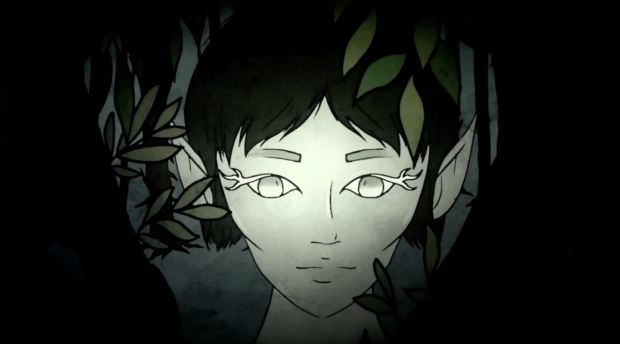 Anyone need a smooth-voiced, enchanting back to work Monday pick-me-up? The Gairloch Museum recently released The Gille Dubh: The Last of the Fairies, a roughly three-minute video presenting a beloved Scottish fairytale narrated by Sam Heughan (Outlander). The short was released by the museum in celebration of winning the £200,000 “Art Fund Museum of the Year” prize. Dubh is a 2D, beautifully hand-drawn look into the local Gaelic folklore inspired by the art of Abe Locke.

In the video, Gille Dubh, the last of the Scottish fairies, rescues young Jessie MacRae, who is lost in the woods. Years later she returns the favor when she hears that Gille is to be hunted by the Laird of Gairloch in his own forest. The video is short, sweet, and Heughan’s narration is absolute musical butter to the ears.

Karen Buchanan, Curator of the Gairloch Museum, explains of Gille Dubh, “he is a shadowy male fairy associated with a place called Loch Adraing, where there are beautiful birch wood forests. His story has come down through the Gaelic oral tradition. Around the turn of the 20th century, many people in the area still claimed to have seen the Gille Dubh.”

Ralph Creative teamed with local writer and illustrator Abe Locke to create the charming short. Heughan joined the team rather by chance: “When Outlander was being made, the Gaelic consultant used a dictionary edited by a former Gairloch Museum curator whose daughter worked on the show. She knew Sam Heughan and very kindly put us in touch,” Buchanan explains. The video is a gentle palate cleanser in a sea of negativity, so feel free to take three minutes to relax and immerse yourself in some Scottish history. It pairs well with a cup of tea, some fluffy socks, and a double feature with Disney’s Brave.