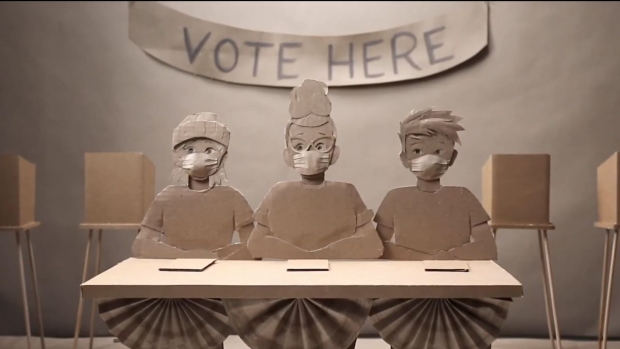 LOS ANGELES -- The #WorkThePolls campaign, from voter ID and turnout organization Spread The Vote, has gone live with its first PSA, Dream of Poll Workers. Written by John Cameron Mitchell (Hedwig and the Angry Inch) and directed and designed by Guggenheim Fellowship recipient Robin Frohardt, the inventive spot merges Frohardt’s puppetry with the title song, written and performed by Mitchell and Justin Craig from Mitchell's new benefit album New American Dream. The PSA was created as a “call to action” to motivate young people to become poll workers for the upcoming election.

“These incredible talents put so much creativity and upbeat humor into their videos, and we believe people will find them fun and inspiring — and we hope they will particularly inspire young people during this most vital election process,” commented Spread The Vote founder and executive director, Kat Calvin. “The more these videos go viral, the more this new generation of voters can learn about immediately available paid employment as poll workers in their communities.”

Spread The Vote has expanded its outreach with the new nonpartisan voter education initiative #WorkThePolls, created to help engage, encourage, and empower young people to take on the job assignments of poll workers across America in this election year.