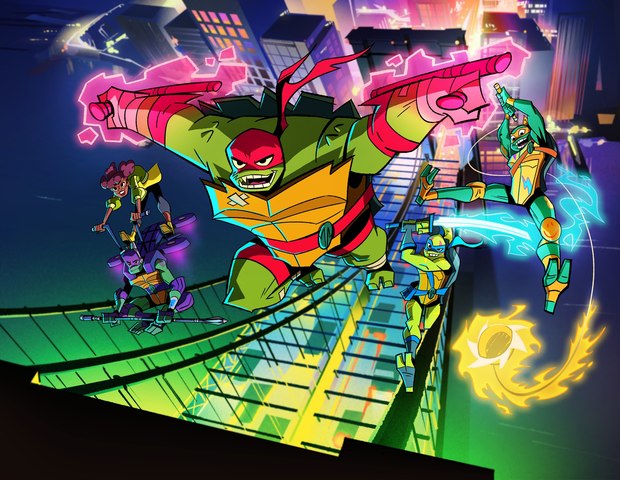 Raph, Leo, Donnie and Mikey emerge from the sewers and tap into undiscovered ninja powers in Nickelodeon‘s reimagined, 2D-animated series Rise of the Teenage Mutant Ninja Turtles, debuting Monday, Sept. 17. The action-comedy series follows the band of brothers as they discover new powers and encounter a mystical world they never knew existed beneath the streets of New York City. In the months following, the series will premiere globally across Nickelodeon’s channels and branded blocks in 170+ countries and territories.

Rise of the Teenage Mutant Ninja Turtles follows the Turtles on all-new adventures as they master new powers, encounter absurd mutants and battle bizarre villains, each with their own motivations. Ranging from mystics, mutants and madmen, new creatures and villains emerge to take on Raph, Leo, Donnie and Mikey in battles across New York City. From the tallest skyscraper to the dankest sewer drain, the brothers learn to work together and navigate the perils of New York City and the hidden realms below in order to fulfill their destiny to become a team of heroes. In the half-hour launch episode, “Mystic Mayhem,” the Turtles discover for the first time that they’re not the weirdest things in New York. Fans can watch a sneak peek of “Mystic Mayhem” on Friday, July 20, at 9:30 p.m. (ET/PT) on Nickelodeon. Additional episodes will be available on the Nick App, Nick.com, and Nick On Demand.

Considered one of the most popular kids’ television programs of the 1980s, Teenage Mutant Ninja Turtles is a classic, global property created in 1984 by Kevin Eastman and Peter Laird. It first debuted as a successful comic book series and then became a hit animated TV show, a live-action television series and later spawned four blockbuster theatrical releases. The property has also translated into a significant consumer products business -- with toys apparel, home goods, video games, DVDs and more -- that has generated billions of dollars at retail. Teenage Mutant Ninja Turtles is a top selling action figure and the franchise is a previous recipient of the Toy Industry Association’s top honor for Property of the Year at the TOTY Awards. The new villains of ‘Rise of the Teenage Mutant Ninja Turtles.’ ‘El Tigre’ and ‘The Book of Life’ director Jorge Gutierrez voices Ghostbear, a human pro-wrestler champion with a taste for cheating. ‘Veep’s Tim Simons voice Muninn and Huginn, gargoyles who are never far from their master.