3D-animated comedy based on the Chinese graphic novel ‘Tibetan Rock Dog’ by Zheng Jun arrives in U.S. theaters on February 24, 2017. 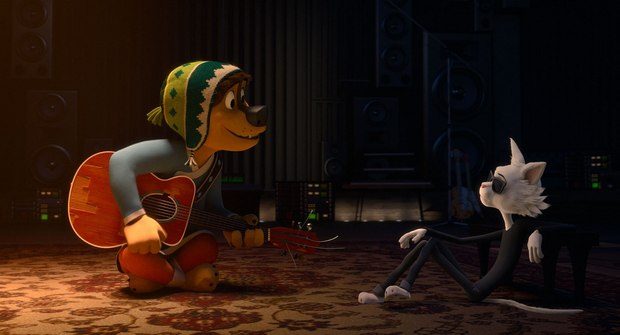 When a radio falls from the sky into the hands of a wide-eyed Tibetan Mastiff, he leaves home to fulfill his dream of becoming a musician, setting into motion a series of completely unexpected events. The movie is directed by Ash Brannon from a screenplay written by Brannon and Kurt Voelker, and co-produced by Beijing-headquartered Mandoo Pictures and Wanda rival Huayi Brothers Pictures.

Bodi, a wide-eyed Tibetan Mastiff voiced by Wilson, is expected to become the next village guard to a group of fun-loving, country-side sheep, but fears he doesn’t have the passion to assume the role from his dad, Khampa (Simmons). Everything changes when a radio literally falls out of the sky and Bodi hears a song by rock legend Angus Scattergood (Izzard), opening his heart to a musical world he must explore.

Leaving home to chase his destiny in the big city, Bodi attracts the attention of Khampa’s nemesis, Linnux (Lewis Black). Leader of a hungry wolf pack, Linnux believes that Bodi is his ticket back into the village and closer to delicious sheep. It is up to Bodi to save his family and friends from harm without giving up his newfound dream.

Rock Dog also features the voices of Kenan Thompson as Riff and Jorge Garcia as Germur, with Matt Dillon as Trey and Sam Elliott as Fleetwood Yak.