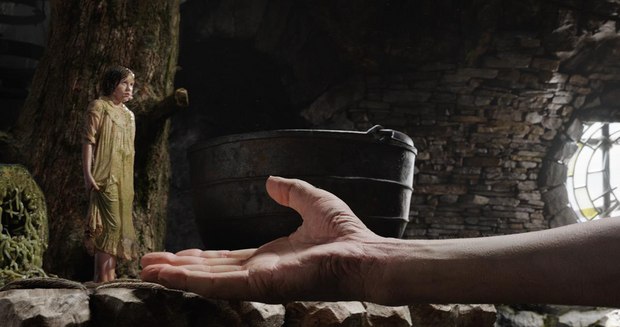 Disney has rolled out a new trailer for The BFG, Steven Spielberg’s take on the beloved children’s book by Roald Dahl.

The new trailer shows off more of Giant Country, showcasing the stunning visuals created by Weta Digital under the leadership of VFX supervisor Kevin Andrew Smith: “It’s a story about friendship, it’s a story about loyalty and protecting your friends and it’s a story that shows that even a little girl can help a big giant solve his biggest problems,” Spielberg says. “I think it was kind of genius of Roald Dahl to be able to empower the children. It was very, very brave of him to introduce that combination of darkness and light which was so much Disney’s original signature in a lot of their earlier works like in ‘Dumbo,’ ‘Fantasia,’ ‘Snow White’ and ‘Cinderella,’ and being able to do scary, but also be redemptive at the same time and teach a lesson, an enduring lesson, to everyone, it was a wonderful thing for Dahl to have done, and it was one of the things that attracted me to want to direct this Dahl book.”

Roald Dahl’s The BFG (Big Friendly Giant) was first published in 1982 and has been enchanting readers of all ages ever since. To date, the book has been published in 41 languages. Dahl’s books, which also include Charlie and the Chocolate Factory, James and the Giant Peach and Matilda, have sold over 200 million copies worldwide. Originally created as a bedtime story, The BFG was Dahl’s own favorite of all his stories.

“It was very important for us to be loyal to the language,” says Spielberg, “and the great writer Melissa Mathison, who also wrote E.T.: The Extra-Terrestrial, wrote The BFG.”