WATCH: New Trailer for ‘The Prophet’ 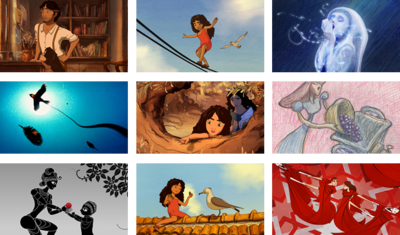 A brand-new trailer for Kahlil Gibran's The Prophet, the animated feature based on one of the most popular volumes of poetry ever written, has been released.

Produced and spearheaded by Salma Hayek, The Prophet is based on the classic, internationally acclaimed and best-selling book by celebrated Lebanese author, Kahlil Gibran. The movie is set on the imaginary island of Orphalese, where a mischievous and mute eight-year-old girl named Almitra (Quvenzhané Wallis) fortuitously meets Mustafa (Liam Neeson), a political prisoner under house arrest, and they form an unlikely friendship. But on the day that they meet, the government tells Mustafa that he is finally free and soldiers quickly escort him to a boat that will take him back home.

On the way, Mustafa shares his poems and views on existence with the people of Orphalese while Almitra secretly follows him. At each step along the way, she dreams up sumptuous landscapes that illustrate his words. When the little girl learns that the government has plans to kill Mustafa, she decides to try anything to help him.

The Prophet was an official selection at Cannes and made its North American premiere at Toronto International Film Festival. The film is also selected to open this year’s Annecy festival. GKIDS will release The Prophet in theaters on August 7th.