New trailer for Pixar Animation Studio’s second film of 2015 provides a look at Arlo’s origin story, taking viewers through a sequence of events that leads him to the little boy who becomes a friend. 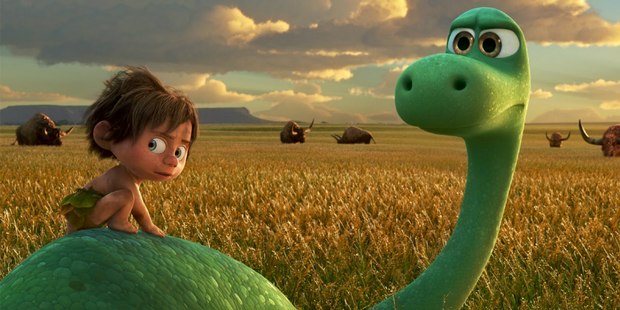 Disney and Pixar have released a new trailer for The Good Dinosaur that reveals several twists and turns in the movie about an adorable Apatosaurus named Arlo (voiced by Raymond Ochoa) and his human companion, Spot.

The second film from Pixar for 2015, The Good Dinosaur asks the generations-old question: What if the cataclysmic asteroid that forever changed life on Earth actually missed the planet completely and giant dinosaurs never became extinct? The film is a humorous and exciting original story about Arlo, a lively 70-foot-tall teenage Apatosaurus with a big heart. After a traumatic event rattles Arlo’s tranquil community, he sets out on a quest to restore peace, gaining an unlikely companion along the way -- a young human boy named Spot (Jack Bright).

The new trailer provides a look at Arlo’s origin story, taking viewers through a sequence of events -- including both an asteroid and a flash flood -- that eventually leads him to the little boy who becomes a friend. Arlo's father Poppa (voiced by Jeffrey Wright) also makes an appearance, and both he and Butch (a T-Rex voiced by Sam Elliott) are heard speaking for the first time.

Bob Peterson, the co-director of Up, was originally tapped to helm The Good Dinosaur; he was removed from the project last year and the original May 2014 release date was moved to 2015.

Sohn made his directorial debut with the Pixar short film Partly Cloudy. He has worked in the art, story and animation departments, and also has voiced the characters of Emile from Academy Award-winning Ratatouille and Scott “Squishy” Squibbles from Monsters University. Ream produced the Golden Globe-nominated film Cars 2 for Pixar Animation Studios, and served as associate producer for Pixar’s Academy Award-winning film Up. She also has an extensive background in producing visual effects and animation for live action films.

The Good Dinosaur opens in theatres nationwide on November 25.