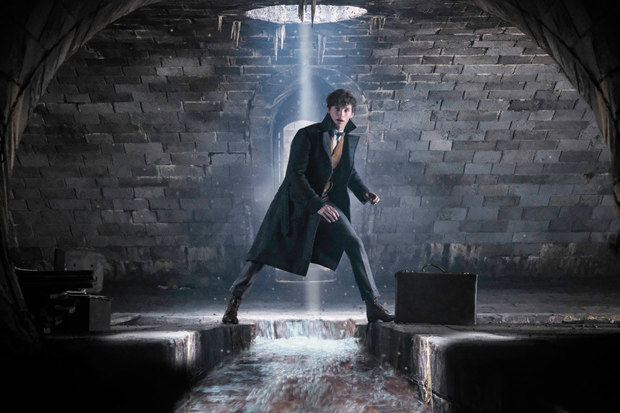 Eddie Redmayne returns as Newt Scamander in the Warner Bros. fantasy-thriller, ‘Fantastic Beasts: The Crimes of Grindelwald,’ which opens this coming November 16th.

Warner Bros. delivered a special bit of magic to a San Diego Comic-Con Hall H filled with Harry Potter fans as the studio released a new poster and special trailer for their upcoming fantasy-thriller, Fantastic Beasts: The Crimes of Grindelwald. Set for a November 16 release, the film is the second in a five-part series based on J.K. Rowling’s book, Fantastic Beasts and Where to Find Them.

The film introduces a young Albus Dumbledore (played by series newcomer Jude Law), the origins of his relationship with Newt Scamander (Eddie Redmayne) and how they team to track down the dark wizard Gellert Grindelwald (Johnny Depp), who as promised, has escaped after his capture by MACUSA (Magical Congress of the United States of America).

According to the Hollywood Reporter, in addition to a panel discussion that included Redmayne, Law and Ezra Miller dressed as Toadette from Super Mario Bros., Depp appeared in character, complete with English accent, at one point waving a magic wand towards the audience and proclaiming, "The great gift of your applause is not for me but for yourselves. Magic blooms only in rare souls. It is granted to those who live for higher purposes. What a world we would make for all of humanity. We, who live for freedom, for truth — the moment has come to rise up and take our rightful place in the world."

This marked the first major public appearance for the controversial star, who has faced allegations of domestic violence that reached a zenith during his nasty divorce from Amanda Heard (settled in January 2017) – Depp recently revealed a slew of startling details about his troubled personal life, including outrageous financial excess that was shocking even by Hollywood standards, in a Rolling Stone interview published last month.