GKIDS releases a new English-language trailer for the Academy Award-nominated Ernest & Celestine, which opens in Los Angeles on February 28 and in New York on March 14. 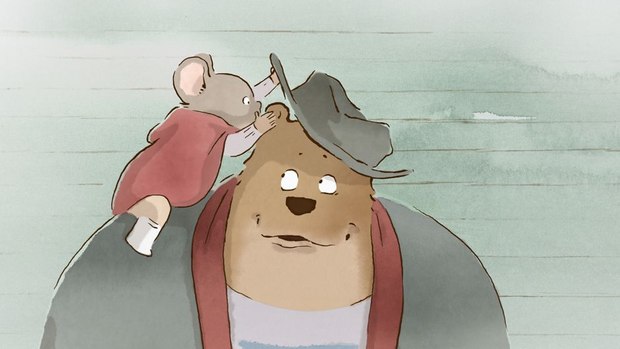 Los Angeles, CA – Animation distributor GKIDS has announced that the Academy Award nominated film, Ernest & Celestine, will open in Los Angeles on February 28 at The Landmark Theater. Both the English and French language versions of the film will be released. The film will open in New York on March 14 at the IFC Center followed by national expansion to all major US markets.

In support of the film’s U.S. theatrical release, GKIDS has released a new English-language trailer:

The English-language version of Ernest & Celestine premiered at the Sundance Film Festival on January 18. The French-language version of the film premiered at Cannes, has played Toronto, and other prestigious film festivals, is the winner of France’s Cesar Award for Best Animated Feature and the Los Angeles Film Critics Association award for Best Animation, and currently has a 100% rating on RottenTomatoes.com. It was nominated for six 2014 Annie Awards this year, the most for any independent or internationally produced film.  In addition to Best Animated Feature, the film received Annie Awards nods for directing, writing, production design, character animation and editing in an animated feature.  The film was submitted for awards consideration in the original French version.