With release of his long-awaited animated feature only a month away, renown director and ‘Despicable Me’ co-creators tells AWN, ‘The wait is almost over!’ 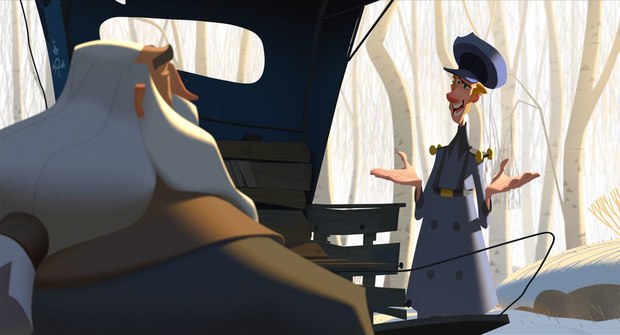 To support its highly anticipated first original animated feature, Klaus, hitting theatres November 8, with a worldwide release following a week later on November 15, Netflix has just released the film’s first trailer. Finally, we get to see an extended look at director Sergio Pablos’ enchanting and exquisitely animated holiday tale, which he so eloquently teased this past June during an Annecy Festival presentation. Acknowledging the film’s release is just around the corner, Pablos told AWN, “It’s definitely exciting! I know that people who have followed Klaus from the beginning have been anxious about the long wait as well, so we could not be more excited about finally sharing the trailer. The wait is almost over!”

In Klaus, a film Pablos has been working on since 2010, a young Scandinavian postman named Jesper, voiced to hilarious extremes by Jason Schwartzman, gets the chance to make his mark when he’s tasked with bringing the postal service to a contentious village in the cold north, where he meets a mysterious, white-bearded toymaker named Klaus.

After Jesper distinguishes himself as the postal academy’s worst student, he is stationed on a frozen island above the Arctic Circle, where the feuding locals hardly exchange words let alone letters. Jesper is about to give up when he finds an ally in local teacher Alva (Rashida Jones), and discovers Klaus (Oscar-winner J.K. Simmons), a mysterious carpenter who lives alone in a cabin full of handmade toys. These unlikely friendships return laughter to Smeerensburg, forging a new legacy of generous neighbors, magical lore and stockings hung by the chimney with care.

Klaus is a true passion project for Pablos, best known as the co-creator of Illumination’s Despicable Me.  The production started and stopped a number of times before finding its home with Netflix. The film has been produced entirely in Madrid, Spain. Pablos and his art directors, Szymon Biernacki and Marcin Jakubowski, previously shared how the film finally came together visually after the introduction of new technology that allowed the traditional, hand-drawn animation to be lit in ways never before achieved.

According to Pablos, love of traditional animation fueled his desire to make the film, which finally became a reality with his studio’s production technology advancements that make the 2D animation more vibrant and contemporary feeling. “As much as I love the classical Disney films, there was one side of them that we seem to forget about: with each release, Disney would bring not only a great story, but some sort of technical or artistic innovation,” he explains. “Animation was an ever-evolving medium, which made it even more exciting. However, at some point in the 90s, we seemed to stop doing that. We stopped innovating and started appealing to the audience’s nostalgia, both in storytelling and aesthetics. And naturally, the audience gravitated to the newer, shinier appeal that CGI brought along.”

“However, I always felt that traditional animation could still be a valid medium to tell a story, if only we dared to push it forward instead of looking back,” he continues. “There’s an instant charm to hand-drawn animation when done right. But we had to reinvent it without losing all the things that made it great. We focused on bringing in new tools that gave us the ability to incorporate volumetric lighting as well as integrating all the elements into a pleasing look that felt like it was all painted by the same hand. Hopefully, audiences will feel the charm of traditional animation but experience it in a completely new way.” After almost a decade of work on what truly defines a labor of love, Pablos, a widely respected designer, animator and director, has finally been able to fuse together his depth of knowledge, vast experience and wealth of ideas into a feature film he often assumed would never be completed. “I’ve learned a great many lessons from all my mistakes - and there have been many - and they’ve all contributed to Klaus somehow, but a few are worth noting” he shares. “I’ve learned to always look at the work not from my point of view, but as an audience member, in order to make sure that the emotional journey they’re embarking on lives up to their expectations while surprising them. I’ve learned to always look for the irony in my stories, which I find is often lacking in films today. I’ve learned to refrain from writing a dialogue line if I can make the point visually.  I’ve learned to avoid falling in love with my first choices, as they eventually prove to be wrong. I’ve learned that I can’t know everything, so I’m painfully aware of my limitations and make sure to find people who are much more talented than me to make up for them. And finally, I’ve learned that learning from the mistakes of others is never quite as effective as making your own, so I’d recommend not to take any of this as wisdom and make all the wrong choices for yourself. It’s the only way to learn!”