Directed by Conrad Vernon and Greg Tiernan, the CG-animated action comedy based on the iconic cartoon series by Charles Addams arrives in theaters on October 11. 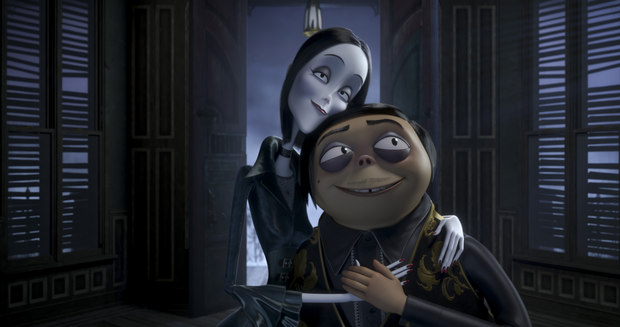 With animation provided by Cinesite, Charlize Theron voices Morticia Addams alongside co-star Oscar Isaac as the voice of Gomez Addams in the first teaser trailer for MGM’s ‘The Addams Family.’

MGM has released the first teaser trailer for its upcoming animated reboot of The Addams Family. Based on the famous New Yorker creations of Charles Addams, the animated action-comedy follows the Addams family whose lives begin to unravel when they face-off against a crafty reality-TV host while also preparing for their extended family to arrive for a major celebration, Addams-style.

The new teaser introduces the idea that some families are more different than others, opening with stick figure drawings typically displayed on the back of a minivan before plunging into the ooky and kooky CG world of the film. Watch the teaser, and check out the official synopsis below:

“The Addams Family lives are turned upside down when they realize the town next door is suddenly full of uptight suburbanites led by an over-the-top TV host who is trying to build the perfect world -- her way! -- and who will stop at nothing to get rid of a freaky family like the Addams. If that’s not bad enough, Wednesday has to go to public school for the first time, and Pugsley has to prepare for a big performance that the extended Addams family from across the globe will be coming to judge. What could possibly go wrong?”

The screenplay is written by Matt Lieberman, and is based on the iconic cartoon series by Charles Addams. The film will be produced by Vernon with Gail Berman, via her production company The Jackal Group, and Alex Schwartz, and will be executive produced by Andrew Mittman, Kevin Miserocchi and Joe Earley. Tabitha Shick, MGM’s Executive Director, Worldwide Motion Pictures is overseeing the project on behalf of the studio. CG Animation and digital visual effects production is currently underway in Vancouver at Cinesite Studios.