With Jon Favreau at the helm, the first ever ‘Star Wars’ live-action series, about a deadly gunfighter in the galaxy’s outer reaches, launches November 12 on the new Disney+ streaming service. 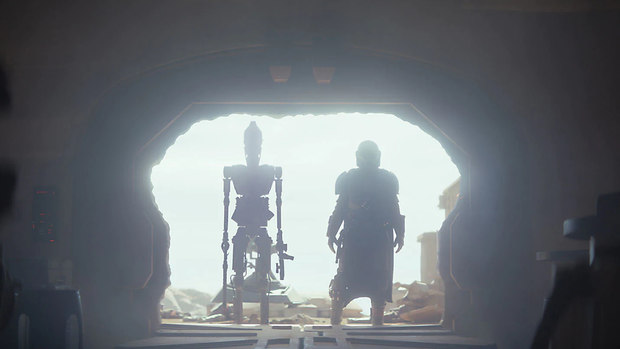 Come November 12, if there’s any reason to check out the new Disney+ streaming service, look no further than the first hour-long episode of Jon Favreau’s eight-episode The Mandalorian, the first ever live-action series in the Star Wars universe. Dropping every week – sort of – through the end of December, and with a second season already under production, The Mandalorian stars Pedro Pascal (Narcos) in the title role as a lone Mandalorian gunfighter in the outer reaches of the galaxy. Gina Carano (Deadpool), Giancarlo Esposito (Breaking Bad), Emily Swallow (Supernatural), Carl Weathers (Predator), Omid Abtahi (American Gods), Werner Herzog (Grizzly Man) and Nick Nolte (Affliction) also star.

With cliffside glimpses of strong but docile blurgs, Trandoshans on the losing end of a fight and a domino-like stack of prisoners encased in carbonite (don’t forget the familiar storm trooper heads on pikes), we soon come face to face (sans a reveal) with The Mandalorian, who indeed is coming and, we assume, is “the best in the parsec.” Cue the ensuing trouble…