Inspired by the early work of Mike Judge and Trey Parker, writer, director, animator, and comic A.P. Laurenson returns to 2D animation’s roots, creating a series about 3 warlords who spend their twilight years clutching to power and filling their time with empty disputes. 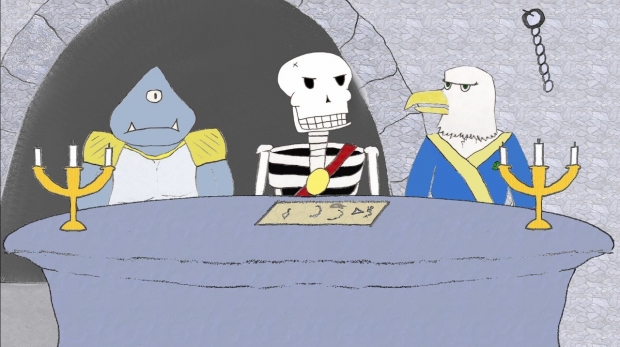 Chicago-based writer, director, animator, and stand-up comedian A.P. Laurenson has combined his humor with pen and paper 2D animation to create the comic web series Lords of Laggard Hill. The series follows three warlords spending their twilight years clutching power and filling their time with empty disputes. Season 2 of the series is now on YouTube.

Laurenson, who serves as writer, animator, and principal voice artist, describes the show as “strictly escapist in its humor,” with the lead characters deliberately generic, classic fantasy archetypes. Inspired by early Mike Judge and Trey Parker (admittedly dating himself with the reference), the animation is hand-drawn and colored, with texture added digitally. The result, he boasts, is “a cheap puppet/storybook feel,” which is actually an accurate reflection of his inspirations’ origins.

The series’ creator, who claims, “I don't know what I'm doing 90% of the time in life, ever,” first debuted his show in 2021, followed by Pushing Buttons, a spin-off series of the Lords achieving difficult feats in gaming. After a six-month hiatus, a second season of the main show was produced for 2022, followed by another spin-off entitled PSA Series.

Check out the Season 2 trailer, then head to the series’ YouTube channel to treat yourself to the free full episodes:

Season 1 is available on Vimeo through the Lords of Laggard Hill website, where you can find Laurenson’s other musings and even pick up some swag.