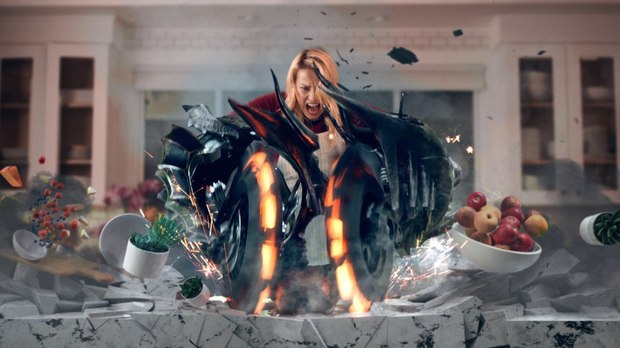 Trapped in a mind-numbing hellscape of suburban apathy? Thanks to the imagination of Lord Danger’s Mike Diva, we now know that Devil May Cry 5 is the cure. The Capcom trailer announces the availability of the highly anticipated installment of the wildly successful action series - evoking the dreary tone of an anti-depressant ad before evolving into a game-infused mega-fantasy. Neighbors use swords to trim hedges, the immaculate dinner host throws down a flaming gauntlet to tenderize the dinner roast – you get the gist. The trailer blends Diva’s absurdist sensibilities and the fast-paced, stylized combat that the Devil May Cry series is known for. Executed in its entirety by Lord Danger’s creative production studio, the trailer integrates seamless creative direction, production, editorial, CG, sound, and music in-house.

Devil May Cry 5 "Something Greater" from Lord Danger on Vimeo.

“As a fan of the DMC series, I wanted to create something that really captures the franchise’s over-the-top style,” Diva says. “We were thrilled when Capcom basically said ‘go for it,’ and let us go nuts.”

“Working with Capcom was an absolute dream,” elaborates Lord Danger Founder/EP Josh Shadid. “They came to us with an amazing brief – create a trailer for DMC5 without using gameplay footage. We enlisted Mike Diva as both creative director and director, and built a team to execute the project entirely in-house, taking full advantage of our 360 model. With projects strained by cost, timing, and scope becoming more of the norm, we’ve found our greatest strength is turning a challenge into an opportunity to make something greater. We can’t wait to work with the Capcom team again, and push the boundaries of what’s possible.”

According to Charlene Ingram, Director of Brand Marketing, Capcom USA, “Lord Danger worked closely with our teams in both the US and Japan to craft a stylish and action-packed trailer that helped capture the over-the-top essence of our game while channeling the feeling of being right in the heart of the action. Josh, Mike and the whole team were fantastic, hands-on, and collaborative throughout the process. We can’t wait to see what people think of the piece they created.”

In the Devil May Cry series, brute action alone isn’t enough to defeat the demons — the game grades you on style for how you are providing said demons with the most epic of beat-downs.

Devil May Cry 5 is now available on Xbox One, PlayStation 4, and PC.