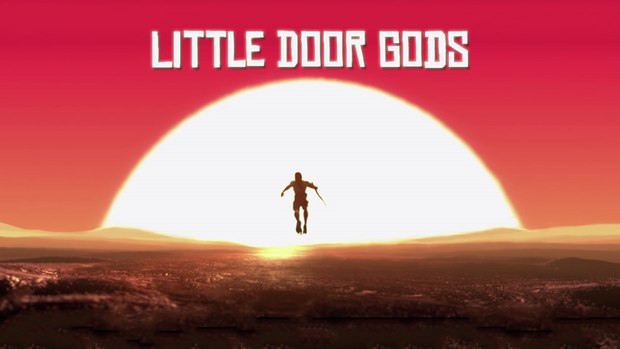 Origins and Making of the Movie

Little Door Gods is the modern-day story of two “Door Gods” (Shen Tu and Yu Lei) facing unemployment in the spirit world as ever fewer people in today’s human world still believe in the spirits. One of the door gods ventures into the human world to do something big in order to prove his value, leading to unexpected encounters and transformations.

Director Gary Wang told the audience that inspiration for the film came from two encounters on his travels. The story of the film was first envisioned three years ago, and the script went through 30 versions of continuous refinement. Furthermore, according to producer Yu Zhou, Little Door Gods is the product of two and a half years of effort from Light Chaser’s 160-person team. Production of Little Door Gods was completed in early July. Director Gary Wang said, “This is our first piece of work. I hope audiences will enjoy the movie and feel touched by it.”

Voice acting for Little Door Gods began two years ago and, in line with standard Hollywood practice, was done before animation, resulting in the accurate and vibrant animation performance in the movie. The voice actors for the lead roles, including Gao Xiaosong, Yi Xiaoxing, Bai Ke and Ji Guanlin, attended the event and shared their stories with Little Door Gods.

The first official trailer for Little Door Gods was shown at the special event. Compared to the first teaser released on March 12, this trailer reveals more of the film’s content, putting on display its fine picture details, its imaginative soundtrack, and the Chinese story features that make its quality unprecedented for animated movies produced in China.

According to the director, the trailer is divided into three sections, in accordance to the three main segments of the story. The tempo rises from warm and tender to intense and action-filled, creating dramatic contrast. The audience had a chance to experience the movie’s carefully crafted production quality, with many saying after the event, “Two and half minutes just weren’t enough.”

At the event, producer Yu Zhou shared some production numbers with the audience: the final version of the film took 80 million CPU render hours, compared to 60 or 70 million render hours for recent Hollywood-made animated films. This suggests that the picture quality in Little Door Gods has reached a similar level with its Hollywood counterparts. From departments such as script, art design, storyboard, modeling, to animation, special effects, lighting, etc., a total of 102,000 intermediate versions were created, achieving its final well-crafted look. In addition, both music and sound effects in Little Door Gods were produced in Dolby Atmos, a first for a domestic Chinese movie production. The movie also marks the first time for a Chinese animation studio to work with the world-class sound effect team at Skywalker Sound, creating an unrivalled audio-visual experience for audiences. A video on the film making process for Little Door Gods entitled The Creation of a Shot was also released, depicting the process of making a four-second shot and how every shot involves the coordinated effort of the entire production team and continuous polishing and refinement.

Light Chaser has received a considerable amount of industry attention and support since its founding two years ago. Little Door Gods will be distributed and co-financed by a joint team consisting of Alibaba (including Alibaba Pictures and Yu Le Bao), China Film, Tencent, Baidu, and Gewara -- marking the first time that the three Chinese internet giants of Baidu, Alibaba, and Tencent (commonly known as BAT) co-invested in one single movie. In recent years, BAT has aggressively entered the movie industry, aiming for success in the intersection of technology and art. According to director Gary Wang, the collaboration between Light Chaser and the three Internet giants strives to achieve this objective and showcase the spirit of “artistic craftsmanship” that has been a long-time goal of Light Chaser.

At the end of the special event, the guests unveiled together the roadshow roadmap and launched the countdown for advance ticket bookings to screenings.