A magical trident holds the key for half human, half Atlantean Arthur Curry to unite the worlds of above and below in Warner Bros’ epic undersea action-adventure. 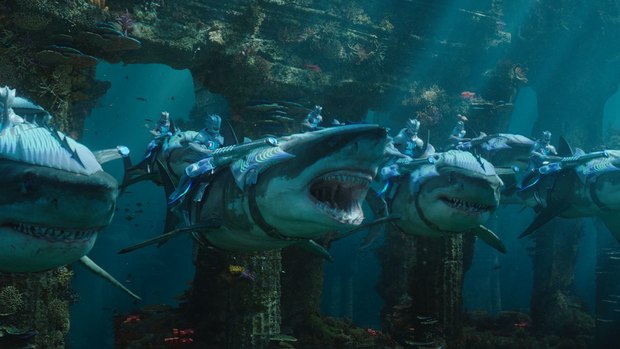 Warner has just released the final Aquaman trailer, packed with an array of stunning designs and visual effects wizardry that promises a film unlike any underwater spectacle you've ever seen before! We finally see glimpses of our hero, half human, half Atlantean Arthur Curry’s origin story, from swaddled infant to snarky browed-Jason Momoa in full-suited splendor. All our swim coaches should be as cool as Willem Dafoe! Mine just made me swim laps while he smoked cigarettes and read Ayn Rand books.

Director James Wan has delivered an action-packed adventure that spans every reef and sand bar of the vast, visually breathtaking world of the seven seas. Our reluctant hero Curry must not only face who he really is, and the destiny that awaits him, but understand the powerful legacy of his people and discover if he is worthy of who he was born to be…a king.

The film is set to hit theaters on December 21, 2018, in 3D and 2D and IMAX, and will be distributed worldwide by Warner Bros. Pictures.

Wan directs from a screenplay by David Leslie Johnson-McGoldrick (The Conjuring 2) and Will Beall (Gangster Squad, TV’s Training Day), story by Geoff Johns & Wan and Will Beall, based on characters created by Paul Norris and Mort Weisinger for DC.  The film is produced by Peter Safran and Rob Cowan, with Deborah Snyder, Zack Snyder, Jon Berg, Geoff Johns and Walter Hamada serving as executive producers.