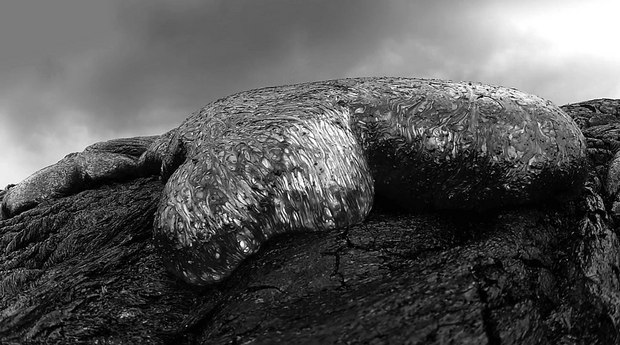 Portland, Oregon-based experimental filmmaker and digital artist Kurtis Hough has come out with his latest project, To See More Light, an epic 15-minute black-and-white film inspired by a visit to Mount Kilauea in Hawaii.

Fascinated by the lava flows he encountered two years ago at the Kilauea Volcano, and inspired by the lyrics of singer/songwriter Leonard Cohen, Hough expanded on his previous work to create a monochromatic blend of animation and live action that depicts life’s cosmic beginnings and its raw, powerful beauty. Featuring mind-bending animation and spectacular time-lapse footage of lava flows, vast oceans and endless skies, along with a mesmerizing soundtrack from musician Colin Stetson, the film is an immersive look into Hough’s expansive view of the natural world and the universe:

Hough has been making experimental time-lapse films for more than a decade, and his interest in the rhythms of the natural world is evident in his previous work, including the dream-like Stumble then rise on some awkward morning (2004) and Mossgrove/Bed of Moss (2011), which explores the lush, mossy landscapes of Oregon. Created from more than 100,000 layered pictures taken over the course of one day, Hough’s Warm Earth, Which I’ve Been Told (2013) offers “a planetary eye on a passing day in the universe, while the fantastically colorful Toyland (2013) is a festive technicolor dreamland. Other recent projects include Transverse Plane Vertical (2015), which Hough describes as “a meta subatomic dance of music elements across seven vertical planes.”