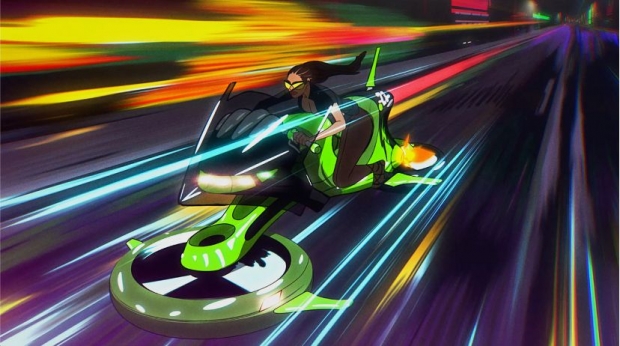 A brilliantly rendered superheroine takes back her power in the animated music video for Jorja Smith x Popcaan’s Come Over. Directed by Amber Grace Johnson of Object & Animal, the short was produced in collaboration with London-based creative studio Future Power Station. Together, they illustrate a modern tale in a hyper-future style by creating a sultry narrative teeming with sci-fi realness.

When COVID hit, Smith reached out to Johnson with her track, tasking her to create an anime-inspired piece. Johnson, a fan of Ghibli, Satoshi Kon, Aeon Flux, Wicked City, and other classics of the genre, embraced the opportunity. “The best part was that production limits in animation are somewhat non-existent, except of course, for how much time you have and resources,” noted the director. “But in terms of actions, it felt infinite.”

Set in a neon-drenched cityscape, the visuals for Come Over pop with color and action.

“I wanted an airborne scene, a hover motorbike, and a fight scene of an undefeated Jorja killing off a fleet of slimy, artificial club fuckboys on a dystopian sun planet using her hair as her weapon,” Johnson added. “Naturally, my script evolved into ideas only my imagination could dream up. We were lucky to have the opportunity to work with Future Power Station, who brought the vision to life and exceeded expectations.”

The creative studio Future Power Station equally embraced the project, sharing, “It’s not often that all the ingredients line up to produce the perfect prescription, but in April we had the perfect storm of coolness land in our laps. One of the best artists out there, bar none? Check. One of the best new directors on the scene who wanted to work with little old us...? Check. A cyber-punk fueled homage to classic 90’s anime full of jet bikes, bone crunching fights and a swaggering attitude screaming out to be made? Check, Check, Check.”

With everything in place, the team blazed through the next 12 weeks working old-school, drawing everything frame by frame with a healthy dose of contemporary techniques to create the final slickness.

“These guys are some of the best in the world and humble beyond belief,” noted Future Power Station member, Geoff Parsons. “And finally, massive props to Amber, firstly for trusting us with this project, and then trusting in us to bring her vision to life. Not often you get to say this, but there were no egos in the mix on this one.”