Watch ‘JG and the BC Kids’ Feature Trailer

Breaking stereotypes with characters from diverse backgrounds and cultures, the 2D animated film, co-produced by Toonz Media Group, Ericka Nicole Malone Entertainment and Elijah Rock Productions and slated for a March/April 2022 release, features two Black central characters - a schoolboy and a young science whiz, plus a female superhero who encourages kids to believe in themselves. 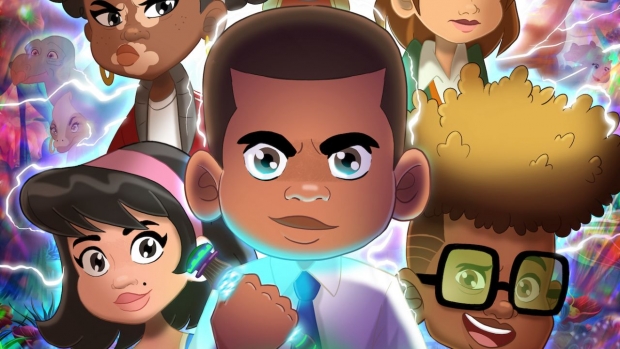 A teaser has been dropped for the new upcoming animated feature JG and the BC Kids. Bringing street smart and book smart kids together to create life smart kids the movie features two Black central characters - a schoolboy and a young science whiz who is trapped inside a fractal world, as well as JG, the female superhero and her band of darling dinosaurs who will mentor and encourage kids to believe in themselves.

Targeting kids 5–9 years old, the movie has been produced in 2D with a blend of hip as well as poignant, positive music. Pre-production for the project has been completed at Toonz's Ireland-based studio Telegael. Slated for release in March/April 2022, the movie will be marketed worldwide by Toonz Entertainment, a subsidiary of Toonz Media Group, led by chief sales and marketing officer Bruno Zarka. Conceptualized by American actress co-star Janet Hubert and based on her children’s book “A Sneaker Feature,” JG and the BC Kids is being co-produced by Toonz Media Group, Ericka Nicole Malone Entertainment and Elijah Rock Productions.

Check out the teaser:

JG and the BC Kids was born out of the need to create a children’s animation property that broke stereotypes and represented characters from diverse backgrounds and cultures. Herself an African American mom, Daytime Digital Emmy-nominated Hubert says when her son was born, she struggled to find toys, accessories and even story narratives that he could relate to. In a world where her son’s identity was starkly under-represented, Hubert wanted to create something to inspire him, and millions of other kids like him.

“It is time for change, and I decided to be and make the change that I seek,” shared Hubert. “I am so proud of this production and our grassroots team who joined me on this journey of creating JG and the BC Kids.”

“This is a project that really resonates with the times that we live in,” added Toonz Media Group CEO P. Jayakumar. “For the Toonz team, we feel extremely honored and proud to be part of this path-breaking feature film. I am very happy with how the movie is shaping up. Kudos to Janet and the entire team. I am sure that JG and the BC Kids will create a lot of excitement among the audience as well as in the industry.”