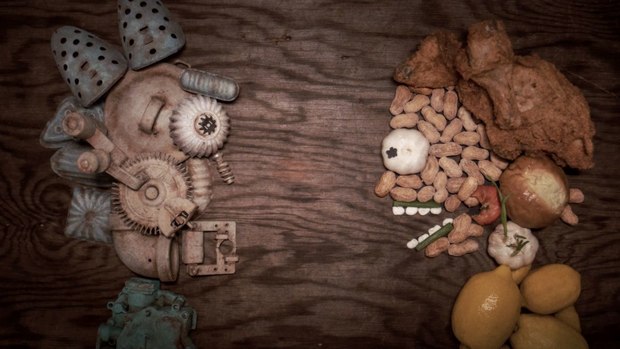 Who could imagine the animated alchemy of a Rick and Morty-infused Jan Švankmajer short? Well, Czech animation studio Open the Portal has done just that, in a stop-motion homage to the legendary animator who hails from their home country, famed for its 609-year-old Prague Astronomical Clock, Charles Bridge and wonderful brown bread. Coming on the heels of their Pickle Rick Reality spot from earlier this summer, Open the Portal has revealed their latest promo bumper for Adult Swim’s upcoming Season 4 launch of Rick and Morty, Justin Roiland and Dan Harmon’s hit animated comedy. Aptly named Rick-mentions of Dialogue, the piece was inspired by Švankmajer’s 1982 short, Dimensions of Dialogue, an odd, surreal (go figure) 11-minute piece complete with stylized food mutilation and various household items, including a dress shoe, masquerading as human tongues.

Rick-mensions of Dialogue from Open The Portal on Vimeo.

The promo took a studio team of six around three weeks to complete: each artist focused on a different aspect of production, including storyboarding, animation, clay animation, lighting, puppet fabrication / painting and post-production. The one-minute piece was shot on two separate stages using Dragonframe to capture the images; After Effects was then used to stitch them all together.

After submitting several promo spot ideas, the studio was pleasantly surprised when Adult Swim picked the Švankmajer tribute. According to producer Jason Milov, “We had a lot of fun working on the Pickle Rick Reality spot, which dropped earlier this Summer and we knew would be a crowd pleaser. But we weren't sure if everyone would appreciate this Jan Švankmajer inspired piece. We're all huge fans of Švankmajer and generally all things Czech animation! Dimensions of Dialogue is one of our favorite Švankmajer films, so we thought it would be a lot of fun to pay tribute to one of the greatest animators of all time and do a mashup with one of our favorite TV shows of all time!”

For an added treat, spend a few minutes with Švankmajer’s classic short…

Jan Švankmajer: Dimensions of Dialogue (1982) from ΜΙΤSARAS //grafos on Vimeo.