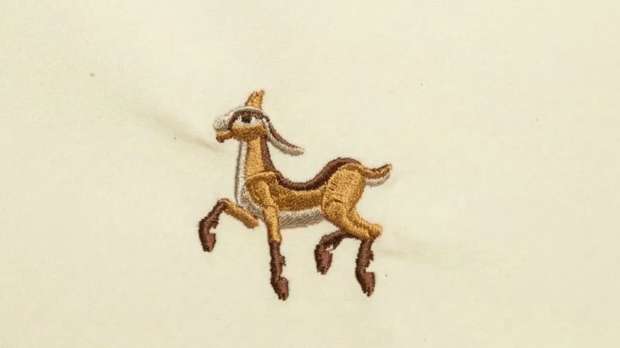 Chad Gadya, a traditional Passover folk song, was rendered in beautiful embroidery on 16-inch cotton matzoh covers, each containing six frames of animation, which were then photographed. This incredibly complicated project presented a number of challenges, including the limited speed of embroidery machines and the limitations of existing embroidery design software, which don’t allow for easy automation. “Automation is crucial in animation,” Gray writes in a post on his StitchBlog. “Both because of the scale of the problem, and because if you want consistency from frame to frame, you want to avoid manual steps that introduce variability.”

To address this problem, the duo created all their embroidery designs using custom software written specifically for animation embroidery that allowed them to control the exact placement of the stitches, not for one frame at a time, but over all the frames as a whole.

The team started with Paley’s animation, which was created in Macromedia Flash. Her animated sequences were then exported in vector file format for Gray to import into Mathematica, which preserved the full polygons for each moving part of the figure.

Gray used the unclipped polygons to determine the direction of stitches, which needed to be kept perpendicular to the major axis of the polygon. “In Nina's style of animation, the polygons don't change shape,” Grey explains, which meant that the direction of the stitches had to follow the movement of the figure, making the final animation look like a single stitched figure that is moving, instead of what Gray calls “a hodgepodge of separate figures.” The frame with stitches based on the orientation of its unclipped form. Gray’s clever code incorporated satin stitching (i.e. a series of flat, zig-zag stitches used to cover a section of fabric) and traveling lines crossing the middle of patches, which allowed the machine to go from one patch of color to another of the same color without having to stop and cut the thread --  crucial to maintaining fast, effective stitching. Gray’s code automatically optimized the process of selecting which colors to stitch first to minimize total thread cutting as well.

Filling patches also posed a difficult challenge because of the potential to stitch themselves into a corner. Grey addressed this issue by creating “walking stitches” that allowed them to reach the end of patches and fill them without getting stuck in the corners without a way out.

An example of Gray's walking stitches.

Gray’s stitchcoding in Mathematica allowed the team to go beyond the restrictions of off-the-shelf software. “This allowed us to automate beautiful iridescent stitches and preserve them from frame to frame, so the resulting animation really looks like moving embroidery,” Paley says.

Watch only the 516 frames of the rendered animation in the player below:

Each matzoh cover used in the short can be viewed individually and purchased here.