WATCH: Hiccup’s Destiny Revealed in New Clip for ‘How to Train Your Dragon 3’

DreamWorks Animation unveils a brand-new clip for the highly anticipated ‘How to Train Your Dragon: The Hidden World’ at NYCC and moves the film’s release date up to February 22, 2019. 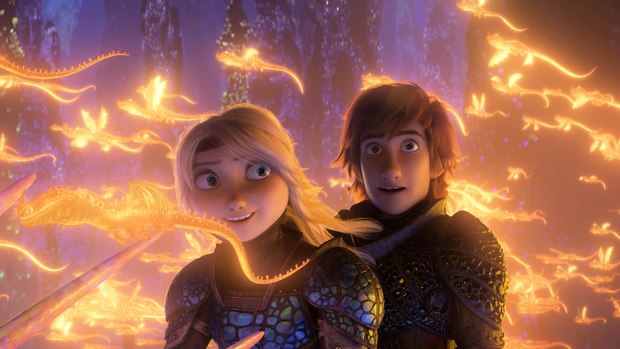 Written and directed by Dean DeBlois and featuring the voices of Jay Baruchel, America Ferrera, Cate Blanchett, Kit Harington, Craig Ferguson and F. Murray Abraham, ‘How to Train Your Dragon: The Hidden World’ arrives in theaters on February 22, 2019.

Universal Pictures and DreamWorks Animation have unveiled a brand-new clip for the highly-anticipated How to Train Your Dragon: The Hidden World at this past weekend’s New York Comic-Con.

The Hidden World completes the story arc first introduced by writer and director Dean DeBlois in the original How to Train Your Dragon movie released in 2010. What began as an unlikely friendship between an adolescent Viking and a fearsome Night Fury dragon has become an epic trilogy spanning their lives.

As Hiccup (voiced by Jay Baruchel) fulfills his dream of creating a peaceful dragon utopia, Toothless’ discovery of an untamed, elusive mate draws the Night Fury away. When danger mounts at home and Hiccup’s reign as chief is tested, both dragon and rider must make impossible decisions to save their kind.

In the clip, Stoic (Gerard Butler) tells young Hiccup about the hidden world of the dragons and that it is his destiny to find it. The new clip also teases a forthcoming trailer for the film that is expected to drop on October 25. Check it out in the player below:

Want more? Read AWN’s Q&A with DeBlois about the forthcoming animated feature here: DreamWorks Animation Unveils the Hidden World in First Trailer for ‘How to Train Your Dragon 3’.