Michael Cawood’s just released award-winning story of equality, told through the adventures of a mushroom, was an international collaboration of hundreds of artists using the Artella online virtual platform. 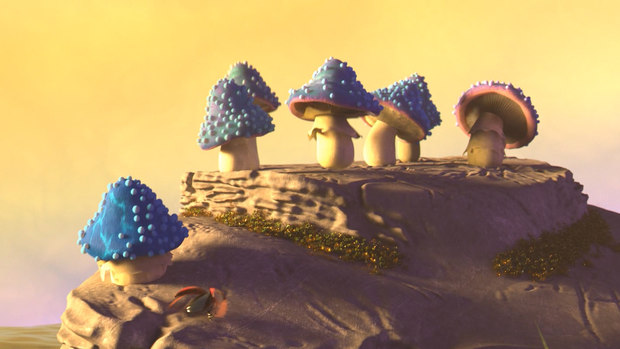 HEROmation’s award-winning animated short, The Wrong Rock, has just been released on YouTube – spend a few enjoyable minutes and check out the innovative, funny and touching film below, as well as a documentary that digs into the making of the short.

Written and directed by Michael Cawood, with Julie Pifher producing, The Wrong Rock is a tale of equality told through the adventures of a mushroom. A pretty nimble and definitely determined mushroom.

The Wrong Rock was produced entirely through a virtual studio system; hundreds of artists from all over the world collaborated online through the Artella platform. Lead by Cawood, the team created the 3D CGI animation in Maya and rendered with Redshift. “I wanted to tap into the themes that affected me as an immigrant,” the director explained. “Before we can change the world, we must put aside our differences. After all, we’re all on the same rock!”

The soundtrack includes an original song created by the band, The Mrs., and a score by BAFTA award-nominated composer Grant Kirkhope, whose credits include well-known video games such as Donkey Kong Country, Golden Eye, Banjo Kazooie, and Mario-Rabbids.

According to Pifher, “Coordinating artists from all over the world is a fun challenge, and it was incredible to see how passionate the team was about the film’s themes. Being on a video call with animators from Spain, Canada, Iran and beyond was really exciting.”

The director previously worked on projects including Dawn of the Planet of the Apes, Pete’s Dragon, Bumblebee, The Lego Ninjago Movie, and Happy Feet. Cawood’s latest short film, Devils, Angels & Dating, has garnered over 17.7M views to date.

The HEROmation website is chock full of wonderful concept art, renders, behind-the-scenes images and information about the production.