Honorary Award from the Academy of Motion Picture Arts & Sciences is presented by Pixar’s John Lasseter. 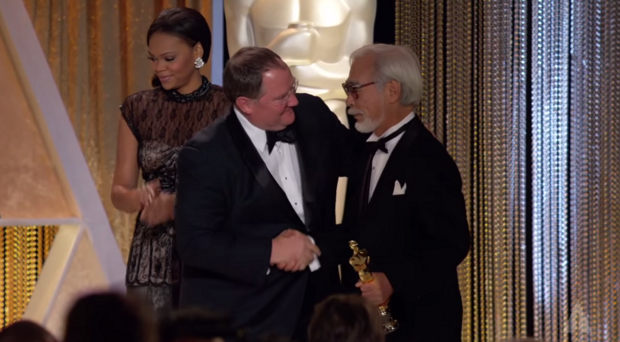 This past weekend, anime legend Hayao Miyazaki was the recipient of an Honorary Award at the 2014 Governors Awards. The event was held on Saturday, November 8, in the Ray Dolby Ballroom at Hollywood & Highland in Hollywood, CA.

The Honorary Award, an Oscar statuette, is given to honor extraordinary distinction in lifetime achievement, exceptional contributions to the state of motion picture arts and sciences, or for outstanding service to the Academy.

The Honorary Award was presented to Miyazaki by Pixar head John Lasseter, who has long been a champion of the director and his work. You can watch Miyazaki’s acceptance speech, below: