WATCH: Going Strong to the Hoop in ‘Space Jam: A New Legacy’ Trailer

Warner Bros. releases new trailer and images for their upcoming animated/live-action hybrid comedy adventure starring NBA legend LeBron James and a team of your favorite Looney Tunes characters in a high-stakes challenge against an A.I.-led squad of digital goons. 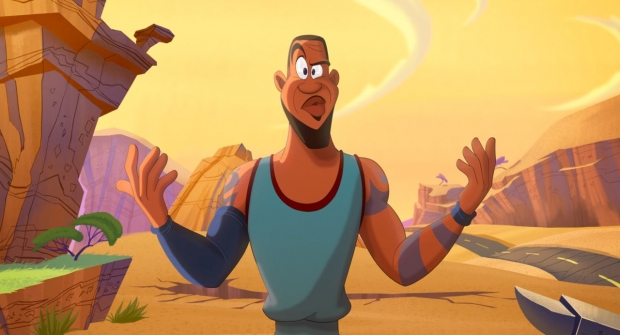 Drawing upon a legacy of cartoon characters unequaled (arguably) in the history of entertainment, Warner Bros. is dusting every one of them off, along with their friends and neighbors, to share the court with NBA legend LeBron James playing the game of his life in their all-new animated/live-action hybrid comedy, Space Jam: A New Legacy. The sequel to their 1996 animated/live-action hybrid, Space Jam, which starred NBA great and fellow legend Michael Jordan, Space Jam: A New Legacy pits James against a rogue A.I. who has kidnapped his son, Dom, who can only be freed by winning a hoops matchup against a nefarious digital Goon Squad.

Directed by Malcolm D. Lee and produced by a team that includes Ryan Coogler and Maverick Carter, the action-packed trailer, replete with every Warner Bros. cartoon character imaginable, thrusts James into both highly stylized digital and cartoon worlds in his quest to find his son. We get to see the basketball star suffer more than one epic faceplant, an Iron Giant cameo, and of course, there’s Granny for the three!

The film is a manic mashup of two worlds that reveals just how far some parents will go to connect with their kids. When James and his son get trapped a digital world, the NBA star can only get home safely by leading Bugs, Lola Bunny, and the gang of notoriously undisciplined Looney Tunes characters to victory over the A.I.’s digitized champions, the Goon Squad, made up of professional basketball stars as you’ve never seen them before.  It’s Tunes versus Goons in the highest-stakes challenge of his life, that will redefine James’ bond with his son and shine a light on the power of being yourself. The ready-for-action Tunes destroy convention, supercharge their unique talents and surprise even “King” James by playing the game their own way. Troy Nethercott (Wonder Park) serves as the animation producer, with Kevin Ishioka (The Mule), Akin McKenzie (When They See Us), and Clint Wallace (upcoming Eternals) serving as production designers.

The film will be distributed worldwide by Warner Bros. Pictures, releasing simultaneously on HBO Max and in U.S. theatres on July 16, 2021.