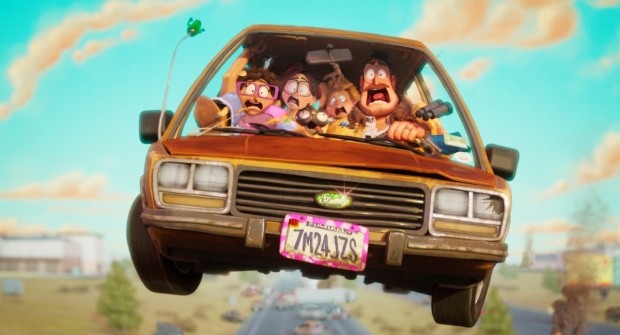 Sony Pictures Animation has just dropped the first trailer for their upcoming animated feature, Connected, the Phil Lord and Christopher Miller-produced film previously known (until roughly two weeks ago) as The Mitchells vs. the Machines. Written by former Gravity Falls scribes Mike Rianda and Jeff Rowe, who also serve as the film’s director and co-director, Connected stars Abbi Jacobson, Danny McBride, Maya Rudolph, Eric Andre and Olivia Colman. And a pug with a particularly aggressive tongue.

The film follows the exploits of The Mitchells, a “regular” family struggling to relate to one another as eldest daughter Katie (Jacobson) heads off to college. Her father (McBride) suddenly determines that bringing her to school via a cross-country car ride, with the entire family (plus aforementioned pug), would be a fantastic bonding experience. But, you guessed it, those plans get waylaid… by a global uprising of electronic devices, including a new line of personal robots, who decide life would be better if they were in charge! And then… you guessed it… stuff happens, complete with gags and the pug, they family works together and saves the day!