WATCH: First Trailer for James Bond 25 - ‘No Time to Die’ 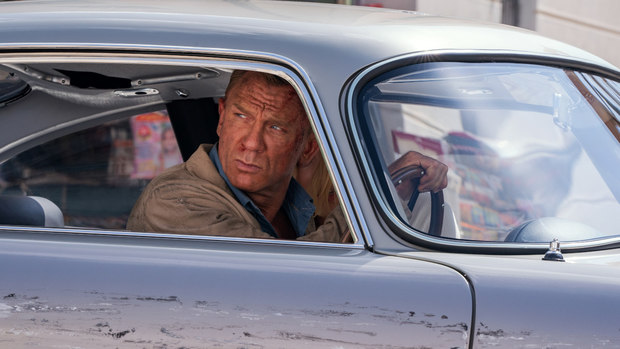 James Bond is back! In four months that is! Daniel Craig returns for what he promises is his last Aston Martin joyride as the indestructible secret agent 007, in No Time to Die, hitting theatres April 8, 2020 (April 3 in the UK).

In the film’s first trailer, the action doesn’t disappoint -- we’re delighted to see Bond in his classic DB5, all tire screeching donuts and twin M134 mini-guns blazing, along with lots of grimaces and shell casings… and a wicked, possibly fortuitous glimpse of 00 agent Nomi, played by Lashana Lynch, rumored as the future 007. In a delicious taunt of Bond’s advancing age and fitness, she cautions, “The world’s moved on, Commander Bond. So stay in your lane. You get in my way, I will put a bullet in your knee… the one that works.” Hah! I can’t imagine either of his knees works very well as this point.

In No Time to Die, Bond has left active service and is enjoying a tranquil Jamaican life. Right.

Chrisoph Waltz’s Blofeld hints at some rather nasty secrets that could take down Bond’s entire world… we also come face to masked face with villain Safin, played by Rami Malek, who dryly quips, “James Bond… license to kill… history of violence… I could be speaking to my own reflection.”

There are some gorgeous stunts, awesome British accents, and did we mention shell casings?