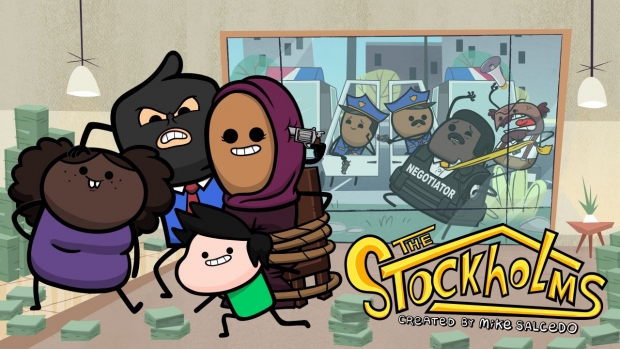 According to series creator, Mike Salcedo, the idea for a hostage sitcom originally came about while working on his webcomic, “Bigfoot.” “It was mainly a weird scenario and didn’t really have a ‘last-panel punchline,’ so I held onto it until we needed a pitch for a show. Eventually Octopie approached Explosm for a collaboration and I was able to dust it off and bring it to life!”

From storyboards to sound design, each episode takes a bit less than a month to produce; with overlapping production, the 10 episodes were completed in five months. Explosm’s team of 10 artists worked full-time on the project; tools included Adobe Animate for backgrounds, character design and animatics, Toon Boom Harmony for animation, Adobe premiere for editing, and Smartsheets for scheduling.

Regarding lookdev, Salcedo shares, “Our awesome background artist, Denise Magdale, and I are huge fans of Powerpuff Girls. With this show having the freedom to be stylistically different from the Cyanide & Happiness shorts, we finally had an excuse to go all in on that UPA, 1950s aesthetic for the background design. For character design, I was inspired by the Hey Arnold method of loosely basing characters off objects. Charlene’s a bowling pin, Ned’s a gumdrop, and there’s a delivery guy who’s a giant slice of pizza if you squint.” “The biggest challenge was just the speed at which we had to pull everything together,” the creator continues. “I worked with our producer, Adam Nusrallah, to squeeze every inch of spare time out of our schedule to make this show look as good as it possibly could.”

Salcedo reveals that the production ran smoother than expected because of his decision to finish character rigs and background lines before storyboards began. “With those frontloaded, storyboard artists could plan their shots with everything scaled 1-1 with what the animators would assemble,” he describes. “That shortened the QA phase, and shaved down the need for storyboards to draw a bunch of their own assets.”

Making a living creating funny comics, webcomics and animated shorts gives Salcedo an interesting perspective on his given choice of careers. “I never had to grow up!” he chuckles. “I get to laugh every day and do what I love. Even when we’re down to the wire and I’m stressing out, I have to confront the fact that there’s a cartoon character farting on my computer screen. That’s usually enough to snap me out of it.”