Now available on Digital and On-Demand, Viva Kids’ animated feature film sequel to ‘SnowTime!’ explores themes of friendship and teamwork, while digging deeply into an examination of pride, betrayal and healthy competition. 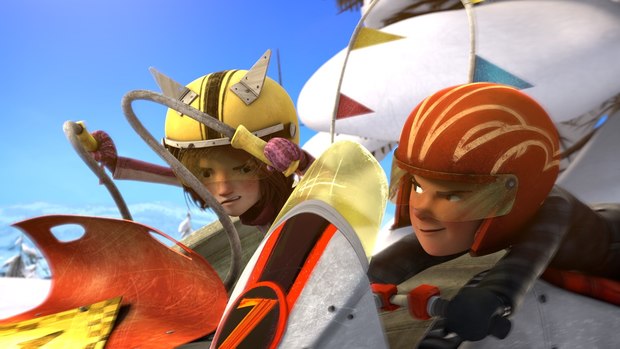 Available now on Digital and On-Demand, director Benoit Godbout’s RACETIME is the sequel to Jean-Francois Pouliot’s SnowTime! which made a splash at 2016’s Sundance Kids. Both films were produced by CarpeDiem Film & TV; RACETIME was released by eOne earlier this year in Canada and has been sold to over 200 countries to date by Pink Parrot Media.

Like its predecessor, RACETIME explores the themes of friendship and teamwork, while digging deeply into an examination of pride, betrayal and healthy competition.

RACETIME is co-directed by François Brisson; Jean-François Pouliot serves as the film’s consulting director and photo director. The film was written by Paul Risacher and Claude Landry & Maxime Landry, and executive produced by Marie-Claude Beauchamp.

Official Synopsis: Frankie and Sophie challenge newcomers Zac and Charlie to an epic sled race, only to break down right before the finish line. Convinced that Zac cheated, Frankie demands a rematch and raises the stakes by betting his team’s clubhouse. Frankie and the gang build a spectacular new racetrack and the stage is set for the biggest race of the season.