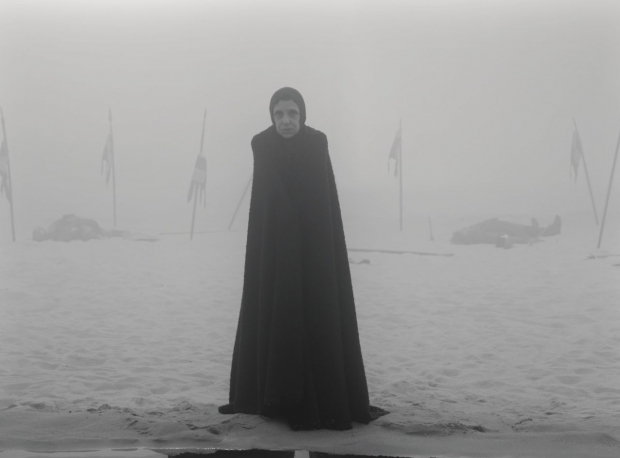 To achieve the look and feel of his black-and-white Shakespeare adaptation The Tragedy of Macbeth, director Joel Coen developed a stark, minimalist visual language that would accentuate characters’ psychological states. East Side Effects - the New York-based VFX outfit that previously worked with Coen on The Ballad of Buster Scruggs - was instrumental in this process, and in a new video shared by the company, we see why.

The Tragedy of Macbeth, now streaming on Apple TV+, was filmed almost entirely on sound stages. Shooting in this way demanded that East Side Effects create set extensions that would capture Coen’s distinct aesthetic -- which draws from an eclectic array of influences including German Expressionist cinema, Mexican architecture, and monochromatic photography.

To better establish perspective, the VFX team created basic 3D layouts for most sets, which were then replaced with either 2D matte paintings or CG geometry. Whenever the script called for big shifts in character perspective, or for more complex camera movement, the team used full CG set extensions or 2 1/2 D matte paintings.

In one pivotal scene involving a fight in a throne room, a 3D model of the set provided a base for placement of the room’s surrounding forest exterior. The throne room’s floor is evocatively covered with dead leaves, which were produced as a mix of CG simulation and elements shot against bluescreen.

Smoke and fog are also crucial elements of the film’s moody atmosphere. East Side Effects drew from a 2D library of smoke and fog plates to enhance and replace footage originally shot on stage, and to add stylistic flourishes to transitions in between shots.

Elsewhere in the video, you can see how the team used water simulation effects to create the illusion that Macbeth’s floor transformed into a boiling cauldron, and how a menacing flock of birds were incorporated into the film’s final scene.

Watch East Side Effects’ full VFX breakdown of The Tragedy of Macbeth: