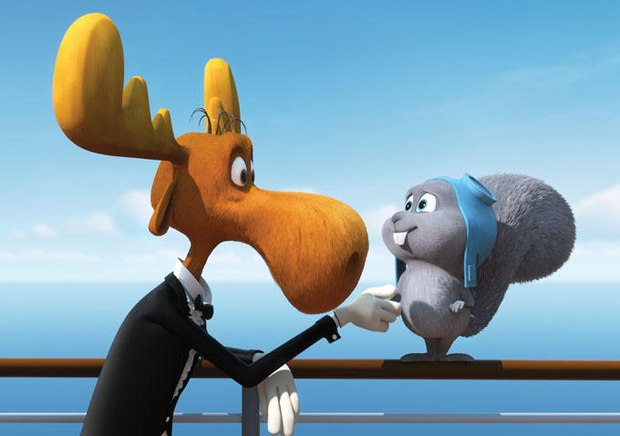 DreamWorks Animation has unveiled two entire minutes of footage from the studio’s Rocky & Bullwinkle short, featuring the voice talents of the legendary June Foray as the voice of Rocket “Rocky” J. Squirrel.

Directed by Gary Trousdale (Beauty and the Beast) and produced by Denise Nolan Cascino (Megamind), Another Fine Moose You’ve Gotten Me Into, or The Man In The Iron Moose!, was written by Thomas Lennon and Robert Ben Garant (Night at the Museum). In addition to Foray, the short stars Tom Kenny (SpongeBob SquarePants) as the voice of Bullwinkle Moose.

In the five-minute short, available October 14 on the new 3D Blu-ray edition of Mr. Peabody & Sherman, Bullwinkle has fallen head over heels in love and is getting married on a cruise ship. But Rocky isn’t so sure about Bullwinkle’s new squeeze: she’s kind of stiff, almost robotic, and can shoot fire out of her eyes. Watch the newly released footage below, courtesy of Entertainment Weekly:

Some readers may recall that earlier this year the cartoon duo also appeared in a commercial for Geico: