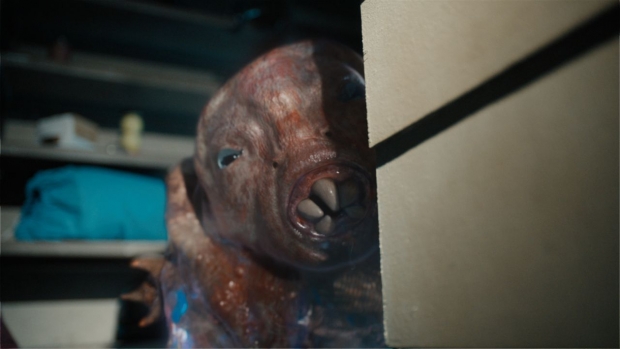 Creative studio Digital Domain, led by VFX supervisor Mitch Drain and his team of artists, delivered a wide variety of visual effects shots for six episodes of Season 2 of Jordan Peele’s CBS All Access series, The Twilight Zone. The work included a range of VFX work, including compositing, digi-doubles, and full CG creature work, as well as set extensions, matte paintings and greenscreen work.  The design, creation and execution of a crazy, alien shapeshifting creature transformation in the episode, “A Human Face,” was their most complex work.

According to Drain, storytelling was always the highest priority. “Visually communicating the subtleties of character emotions in an interesting way was our main goal. We collaborated very closely with the client side VFX supervisors, Mark Savela and Curt Miller. We would first receive a briefing from them on their respective episodes, then the design phase would begin for the more complex work. The ‘Mags’ creature for ‘A Human Face’ was, by far, the most complex. Digital Domain creature designer Chris Nichols created multiple drawings of the alien in various stages of transition, from creature to the form of the teenage girl, Mags. Ideas were shared with the filmmakers and honed until all were in agreement that the character would serve the story.”

Tackling the Mags creature was the biggest challenge for Drain and his team. “The alien transforms from a Tardigrade-like monster into the form of a recently deceased teenager,” he explains. “It was important that when we first see this creature, it is a hideous alien that is gathering DNA and information from its environment. As it processes this information, it begins, very subtly at first, to take on the characteristics of its human counterpart. It was an important story point that the parents recognize flashes of their daughter in the creature, even if the audience doesn’t.” He goes on to note that the transition from creature to human was daunting because they decided early that a traditional morph, or dissolve, solution would not communicate the creature’s struggle to replicate itself into Mags. “Multiple passes of animation of the creature and a digi-double of the Mags character were allowed to intersect randomly,” he says. “The compositing team used these areas to allow portions of Mags to break through and recede as more of the human form takes over, until we see the full human character of Mags.”

“One of the most interesting issues to solve were the aesthetics of what came to be called the ‘MagsThing’ sequence in ‘A Human Face,’” he continues.  “First, we needed to synthesize the abstract concept of the creature, down to its visual elements. References were provided of images processed through Google’s DeepDream, which presented many challenges. DeepDream uses a neural network to reference patterns in images, then replaces areas with other images based on that pattern. Thousands of images are referenced to create a chaotic pastiche of semi-recognizable forms.”

Needing to simplify this process, yet still convey the idea that the creature was processing data to learn how to replicate the human form, they arrived at a solution: create an animating pattern of imagery that could cycle through, and be glimpsed from, within the creature. “When first seen, the alien has a semi-transparent quality,” Drain reveals. “That allowed for the animating pattern, along with internal organs and a skeletal structure, to all be seen at once. These elements, combined with secondary FX animation that created a roiling effect over the skin of the creature, provided compositing with all they needed to create the constantly changing form of the alien throughout the transformation.”