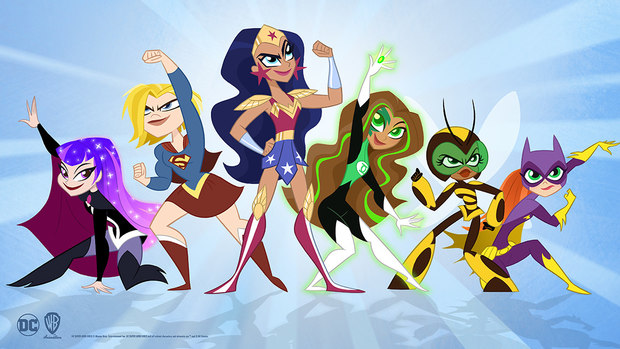 When six ordinary girls meet and discover that they each have extraordinary powers, they decide to join forces to take on one of Metropolis's most sinister villains. DC Super Hero Girls is an all-new animated action-comedy series from Warner Bros. Animation, based on characters from DC. The new series kicks off Friday, March 8, across all Cartoon Network platforms including CN App and On Demand, with a special one-hour movie, #SweetJustice, followed by new episodes airing Sundays beginning March 17. The show features fresh character designs and storytelling from Emmy Award–winning producer Lauren Faust (Super Best Friends Forever, My Little Pony: Friendship Is Magic, Foster’s Home for Imaginary Friends).

The world may know them as Wonder Woman, Supergirl and Batgirl, but not-so-typical teenagers Diana, Kara and Barbara, alongside their Super Hero friends, have much more to deal with than just protecting the citizens of Metropolis from some of the most sinister school-aged Super-Villains of the DC Universe. After all, being teens is tough enough, what with school, friends, family and the chaos that comes with managing a social life.  But add super powers and a secret identity to the mix, and things can get a lot more complicated.

The new series is a global initiative with Cartoon Network and builds on the successful DC Super Hero Girls global franchise which inspires girls to embrace their unique abilities and harness the power of teamwork and diversity to discover their true potential.  In addition to the new series, fans will also be treated to fresh storytelling in 2019 with new YouTube shorts, graphic novels, games, as well as a brand-new product line across multiple categories.