Series starring the voices of Tara Strong and Brad Norman premieres May 11 on Amazon Prime Video. 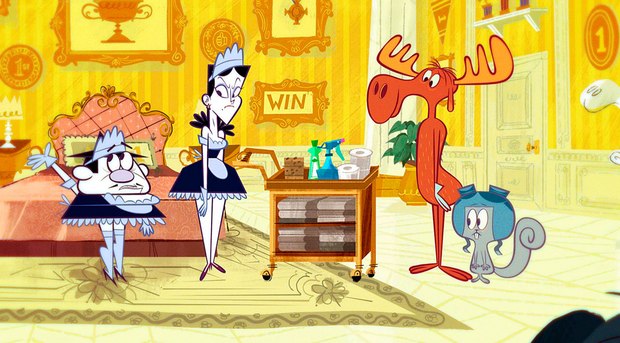 ‘DreamWorks The Adventures of Rocky & Bullwinkle’ drops its first season May 11 on Amazon Prime Video.

DreamWorks The Adventures of Rocky & Bullwinkle debuts May 11 on Amazon Prime Video, and to get fans warmed up, the studio has released a trailer and clips from the series’ first season.

From executive producer Scott Fellows, the world-famous talking moose and flying squirrel are back in The Adventures of Rocky and Bullwinkle, a serialized comedy about two goofball best friends who routinely find themselves thrust into harrowing situations but end up saving the day time and again. As Rocky and Bullwinkle's innocent and silly ambitions to become rock stars or find lost treasure end up dovetailing with Fearless Leader's sinister plans to take over the world, our heroes are set on a collision course with notorious super spies Boris Badenov and Natasha Fatale. Here is a trailer and clips to share with your readers!

The series features the voices of Tara Strong as Rocky, Brad Norman as Bullwinkle, Rachel Butera as Natasha, Ben Diskin as Boris, Piotr Michael as Fearless Leader and Daran Norris as the narrator.