Yesterday, football fans got a halftime treat - a sneak peek of Nickelodeon’s New Original CG series based on the best-selling books by Lincoln Peirce; the show follows Nate, a precocious 11-year-old boy and his misadventures in middle school. 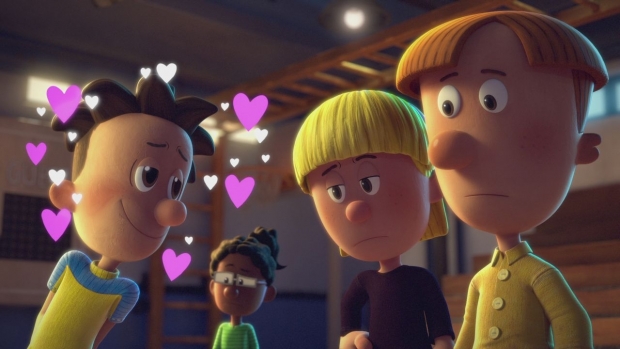 During Sunday’s halftime presentation of Nickelodeon and CBS Sports’ slime-filled NFL Wild Card Game on Nickelodeon, Nickelodeon debuted its new series Big Nate, which hit Paramount+ today! So, if you’re NOT a football fan (we’re really not either!) and you missed it, it’s NOT too late! See it here NOW!

In the clip, “Catastrophe,” Nate is paired with Jenny on a school project, and he hopes to prove his awesomeness to her, but his cat phobia threatens to destroy his cool:

The animated original series Big Nate is based on the best-selling children’s books and comic strip written and illustrated by acclaimed author and cartoonist Lincoln Peirce. Produced by Nickelodeon Animation Studio, Big Nate follows a precocious 11-year-old boy named Nate and his best friends as they navigate sixth grade with humor and style.

The all-new CG animated series features original storylines centered on Nate, a sixth-grade kid who has a never-ending need to prove his awesomeness to the world. Whether he’s dealing with disasters at home or detention at school, Nate Wright is no stranger to a challenge. Luckily, he’s able to express himself through the world of cartoons that he creates. Charming, mischievous and a magnet for misadventure, Nate always finds a way to turn trouble into fun.

The series is executive produced by Mitch Watson (All Hail King Julien) and John Cohen (The Angry Birds Movie) and produced by Amy McKenna (Beware the Batman), with Lincoln Peirce serving as consultant throughout development and production. Bridget McMeel is co-producer.