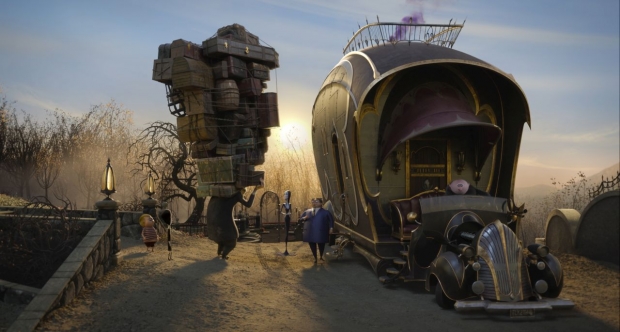 As the sole vendor for The Addams Family 2, MGM’s animated comedy sequel to its hugely successful The Addams Family (2019), Cinesite Vancouver was tasked with bringing the Addams Family to life… so they could go on vacation. The studio’s 512-strong crew created the entire film, from storyboarding and design through to final delivery, a total of 1248 shots across 93 minutes.

Cinesite’s Kevin Pavlovic and Laura Brousseau lead the team, with the film directors Greg Tiernan & Conrad Vernon, moving into production on The Addams Family 2 soon after release of the first film.  While the action in The Addams Family took place primarily in and around the Addams’ house and neighboring town, the latest movie is set in a range of locations as the Addams travel across the country. It was essential to create an authentic road trip feel, with a realistic sense of distance covered and time passing and difference in the places they are visiting. “It really needed to feel like you were going to Niagara Falls or the Grand Canyon,” said Brousseau. “From a production standpoint, this film was much more ambitious than the first. There was a lot more asset work to do, and a lot more FX—bigger, more difficult, and more complex FX.”

The “dilapidated elegance” that, in the first film, drove design choices in and around the Addams’ mansion was again used to develop the interior of the Addams’ camper van.

The Addams Family 2 Cinesite Breakdown showreel from Cinesite on Vimeo.

“It’s a character in itself,” Brousseau continued. “It’s very much representative of the Addams themselves and we wanted to bring that same sort of feel to the camper van. We wanted it to be authentic to them, albeit smaller. So, we put a lot of effort into creating a rich and varied palette of dark and varnished woods, beautiful, rich-colored carpets, and upholstery. Everything is a bit weathered and used, but there are warm, glowing sconces on the walls, jewel-toned stained glass, and a wood-burning fireplace. It feels luxurious and comfortable.”

Production designer Patricia Atchison and art director Chris Souza worked on a color script to support the sense of distance covered and time passing while also supporting the mood and tone of each sequence. For example, night-time on the highway looked different to night-time at the Grand Canyon.  Atchison and Souza worked closely with the surfacing and lighting teams to achieve these goals. “We incorporated cinematography at a very early stage, at previz and after storyboards,” explained Pavlovic. “We established the color script for the whole film as early as possible, matching the tone and settings from the script. That way, when the camera guys in the previs stage were working, they weren’t just focused on the camera. They would also be aware of time of day in scenes and getting lighting notes. Lighting usually comes after animation, later in the process, but by incorporating that process into an early stage, it inspired not only the camera work but the animation as well. Everything is working towards a common goal, and by everyone having that information early we didn’t need to revise other departments’ efforts later to make it work.”

The Addams Family 2 includes an impressive rendition of Niagara Falls with extensive reference footage used to nail the majestic look and natural feel of the real-life location. Cinesite’s team recreated the stonework, railings and foliage of the actual location and paired it with layered, hyper-detailed effects simulations so that the water moved and retained its color authentically throughout. Another important location in the film is the Grand Canyon National Park in Arizona, which the team rendered in all its natural beauty, bringing in the familiar shape language of the rest of the film. The Canyon is seen at different times of day, with its eventual destruction following a series of explosions orchestrated by Pugsley. For look development, lighting and rendering, Cinesite utilized Gaffer, an open-source, node-based application, along with Arnold ray tracing renderer to deliver a rich, stylized CG world. To manage the increased scope and scale of the movie and the immense rendering demands that came with an ever-present deadline, the Vancouver studio adopted Intel Open Image Denoiser to help deliver final rendered images without compromising on the quality.