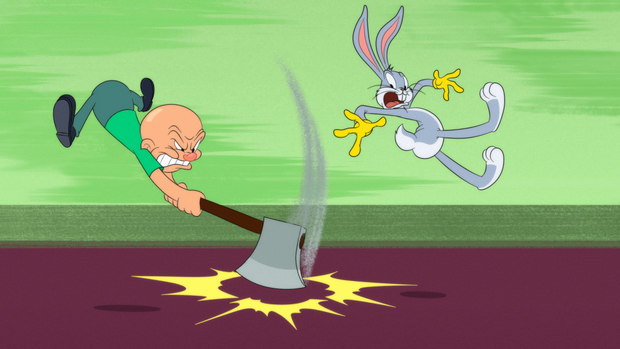 We finally got to see some of Warner Bros. Animation’s brand spanking new Looney Tunes shorts here on the big screen in Annecy, showcased for a screaming, standing-room-only crowd, and they did not disappoint! WBA has now followed up its highly anticipated Annecy reveal with the release (watch below!) of Dynamite Dance, directed by David Gemmill, one of the first batch of finished shorts unveiled from the upcoming Looney Tunes Cartoons series. In WBA’s Annecy presentation, in addition to sharing multiple shorts with the crowd, executive producer Pete Browngardt and supervising producer Alex Kirwan gave Annecy attendees a behind-the-scenes look inside the program’s production process. Mummy Dummy, another of the new shorts, where Bugs mistakes an Egyptian tomb for a vacation resort, screened to an enthusiastic crowd on opening night in front of Lino DiSalvo’s new animated feature, Playmobil.

Looney Tunes Cartoons is a series of new animated cartoons starring revered, classic Looney Tunes characters like Bugs Bunny and Elmer Fudd. In a bold WBA commitment, each “season” of shorts will include 1,000 minutes of new Looney Tunes animation, produced by a premier crew of artists, that will be distributed across multiple platforms — including digital, mobile and broadcast.

The new shorts echo the high production value and process of the original Looney Tunes theatrical shorts, with a cartoonist-driven approach to storytelling. Bugs Bunny, Daffy Duck, Porky Pig and other marquee Looney Tunes characters will be featured in their classic pairings in simple, gag-driven and visually vibrant stories. Each cartoon will vary from one to six minutes in length and, from the premise on through to the jokes, will be “written” and drawn by the cartoonists, allowing their own personality and style to come through in each cartoon.