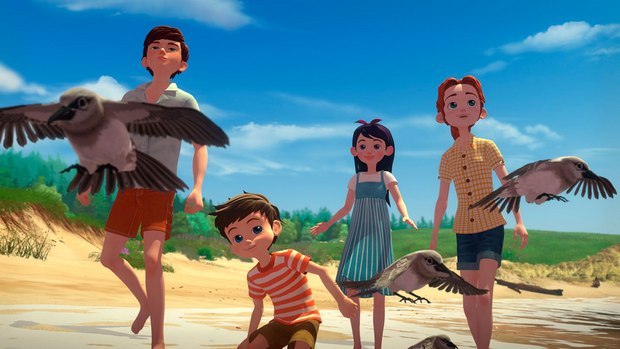 Fathom Events will present May 8 special screenings of ‘The Boxcar Children: Surprise Island’ at theaters across the United States.

A new behind-the-scenes clip has been released to promote Fathom Events, Shout! Kids and Legacy Classics’ one-day special screening May 8 of the animated feature The Boxcar Children: Surprise Island.

This full-length move features the voices of Martin Sheen, J.K. Simmons, Griffin Gluck, Joey King and Dane DeHaan. In addition to the feature content, audiences will be treated to an exclusive introduction from Gluck and, following the feature, producer and director Dan Chuba will explain the process of adapting the book to film and the animation methods.

Tickets for Boxcar Children: Surprise Island can be purchased at www.FathomEvents.com or at participating theater box offices. For a complete list of theater locations, visit the Fathom Events website.

Boxcar Children: Surprise Island is based on the second book in the series by Gertrude Chandler Warner and tells the story of the Alden children, who spend a summer living on their grandfather’s small, nearly uninhabited island. There they meet Joe, who is friendly and helpful, and inexplicably living on their island. Does their new friend have a secret?