Produced in collaboration with Sacrebleu Productions, experimental animated short is in the running for France’s César Award. 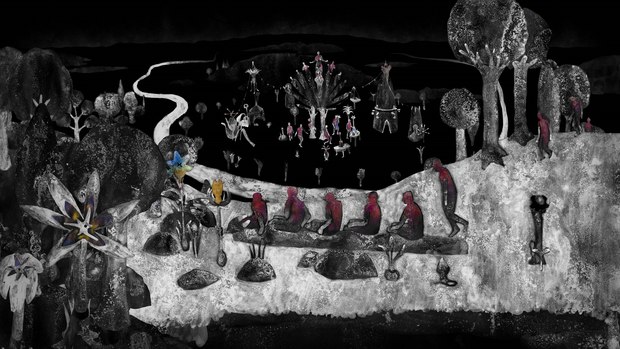 2019 is starting to look like a pretty great year for short films with the online release of Boris Labbé’s very excellent experimental animated short, La Chute (The Fall).

Making its limited online debut as a Short of the Week, La Chute is thematically massive in scope, a 15-minute cycle of divine terror that echoes Dante’s “Divine Comedy” and the paintings of Hieronymus Bosch and Pieter Bruegel. “As celestial beings descend to Earth vitiating its population, the world’s order unbalances,” the film’s description reads. “Initiated by these terms, a tragic fall leads to the parturition of crucial opposites: Hell and Heaven’s circles.”

As an artist and animation film director working between France and Spain, Labbé has collaborated with Sacrebleu Productions since 2013, creating short films, audiovisual concerts and video installations. La Chute has screened at more than 60 international film festivals, including Animafest Zagreb, where it won the Grand Prix; OIAF, where it received the top prize for non-narrative animation; and Annecy, where it won two special prizes, the FIPRESCI Award and the André-Martin Special Distinction for a French Short Film.

While largely ignored by The Academy, which did not include the film in last month’s Oscars shortlist, La Chute is still in the running for France’s top honor, the César. Watch it for a limited time in the player below:

(via Short of the Week)