Studio delivers over 300 shots for satirical comedic drama about the fictionalized rise of Catherine the Great, which required extensive on-location collaboration to create large scale environment extensions for Caserta Palace and the military camp at the Russian Front. 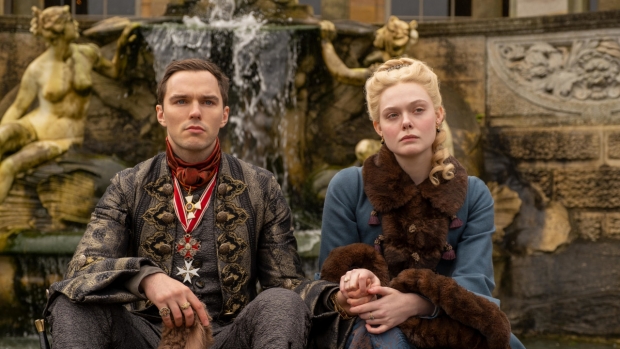 U.K. VFX studio BlueBolt was lead visual effects house for The Great, a satirical comedic drama about the rise of Catherine the Great (Elle Fanning) from outsider to the longest-reigning female ruler in Russia's history. The series is fictionalized and portrays Catherine in her youth and marriage to Emperor Peter III. The show, released in the U.S. on Hulu in May 2020, recently debuted in the U.K. on Channel 4.

Created by The Favourite co-writer, Tony McNamara and produced by MRC Television for Hulu, the series is a fictionalized, fun, and anachronistic story of an idealistic, romantic young girl who arrives in Russia for an arranged marriage to the mercurial Emperor Peter (Nicholas Hoult). Hoping for love and sunshine, she finds instead a dangerous, depraved, backward world that she resolves to change. All she must do is kill her husband, beat the church, baffle the military, and get the court on her side.

Bluebolt - The Great VFX Breakdown from BlueBolt on Vimeo.

To ensure key VFX sequences were shot efficiently, and data needed for post-production was successfully captured, the on-set team, lead by on-set VFX supervisor Rob Delicata, was on location throughout the six-month shoot. Locations included Hatfield House and Wrest Park as well as at Caserta Palace in Naples. The studio work was filmed at Three Mills Studios in Bromley-By-Bow, where sets were built for the majority of the interior palace scenes throughout the series.

The team was also tasked with creating a kaleidoscope of CG butterflies for two episodes and extensive VFX detail in a fight sequence between Count Rostov and Peter consisting of 30 challenging shots of vital wound and blade consistency. The BlueBolt team started post-production for The Great in October 2019 but due to the global pandemic, was forced to relocate; working from home setups, the team managed to deliver the episodes without delay. The show was delivered during the COVID-19 total lockdown of mid-April 2020.

“From a technical perspective we’d been preparing for the inevitable for about a month before we were locked down, but then there’s the human element to consider as well, and that’s much harder to plan for,” explained BlueBolt CEO, Lucy Ainsworth-Taylor. “Our brilliant technical team worked hard to set up secure remote working for everyone, so we had a solid pipeline in place almost straight away and were able to carry on smoothly.”

“The later episodes required more VFX, so our shot count grew during the tight delivery schedules,” Ainsworth-Taylor added. “But, despite all this, we delivered everything on time, which is quite something given the circumstances. Our team used a combination of Zoom and Cinesync to communicate with the directors for shot approval, it worked perfectly with everyone able to easily adapt to the new working practice that’s now in place for whatever the future holds for us all.”

The Great airs on Channel 4 Sundays at 9PM, it is also available to watch on Starzplay and Hulu in the US.