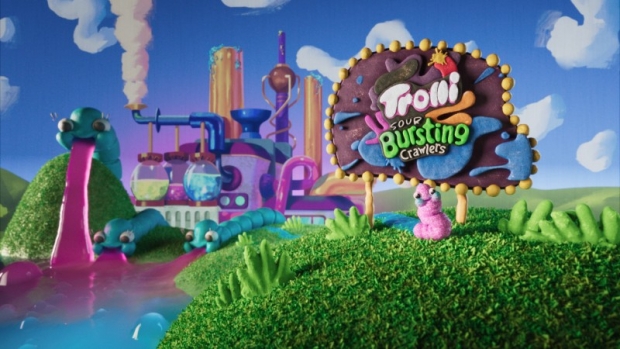 Blinkink’s Renee Zhan was tapped to create the Gooniverse, the company’s fourth collaboration with Wieden & Kennedy Portland for Trolli’s new product, Sour Burstin’ Crawlers. The spot is a factory of imagination and decapitation, where Sour Burstin’ Crawlers are turned into delicious goo to be injected into their brethren.

It’s been 0 days since the last incident at this factory. The conveyor belts jam, and “Sour Burstin’ Crawlers” are injected so much they burst. The factory machines can’t resist the tasty-looking worms and slurp one up when they think no one is looking. It’s gory, gooey madness and mayhem in the Trolli Factory. Meanwhile, the worms are all singing happily as if this is the best day of their lives.

Zhan’s vision was to highlight the darkness, humor, and music in the terrifying factory setting, in stark contrast to the happy, brightly colored worms singing silly rhyming lyrics.

Working with Saurus Animation, an award-winning CG studio in Norway, the weird and wonderful world of Trolli was recreated via CG with realistic stop-motion textures to achieve a handmade feeling. "I’ve been a fan of Trolli for years (both the ads and the worms!), so it was a dream come true to be approached with this script,” commented Zhan. “I loved the idea of a terrifying factory filled with happily singing worms who are thrilled to be ground up into goo and injected into other worms.”

Zhan continued, “We wanted to build on the fun characters and irreverent tone created by Becky and Joe and Sam Gainsborough on previous campaigns. For this project, we also wanted to create a really expansive world. We drew on inspiration from films like Charlie and the Chocolate Factory to create a fun yet terrifying environment.”

“Character designer Ewa Luczkow designed the factory machines and concept artists Xavier Rem, and Clément Danveau created background matte paintings,” Zhan concluded. “We worked with Saurus Animation to create realistic textures and a handcrafted feel for the factory and the worms. I love the Trolli universe (or GOOniverse as we called it), which is full of weird and offbeat humor."

Get your gooey on… check out the Gooniverse:

Trolli_Renee_Zhan from Blink on Vimeo.