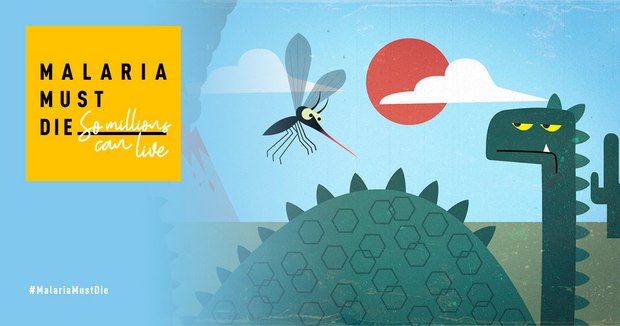 Aardman animated a PSA for the campaign Malaria Must Die So Millions Can Live.

LONDON -- Award-winning studio Aardman has teamed up with the global campaign Malaria Must Die So Millions Can Live to raise awareness of the deadly history of malaria and call upon leaders to “unite and fight” a disease that takes the life of a child every two minutes.

Launching on Commonwealth Day, the new animation, voiced by actor Hugh Laurie, takes viewers through the history of the disease from the first recorded case in ancient China to the current day. The short also highlights the progress that’s been made in the fight against malaria, while serving as a reminder that half the world’s population is still at risk. The disease claims 445,000 lives a year -- a child every two minutes -- and over half of these deaths occur in British Commonwealth countries.

The animation is part of the continued campaign call for leaders meeting at the Commonwealth Heads of Government Meeting in London this April to take concerted action. Commonwealth populations are disproportionately affected by the disease and leaders are being urged to make new commitments to beating it at CHOGM. Actor Hugh Laurie lent his voice to the Aardman PSA for Malaria Must Die So Millions Can Live.

"This wonderful animation by Aardman tells the story of malaria, our oldest and deadliest enemy -- an enemy we’re now in a position to defeat, once and for all,” says Laurie. “I am proud to be part of this campaign calling for bold, political action to fight the disease, because it remains one of the biggest killers of children and yet is entirely preventable, and costs less than a cup of tea to treat. We can all make tea, can’t we? I hope everyone who watches this film shares it and supports the Malaria Must Die campaign, so that millions can live.”

This new animation for Malaria Must Die continues the tradition of Aardman creating content for charities and not-for-profit organizations, helping them to communicate complex messages through the medium of animation. Recent projects include Share the Orange and Santa Forgot for Alzheimer’s Research U.K. and Pantosaurus for the NSPCC.

“We love making films for charities because it gives us the opportunity to use our creativity in a meaningful way beyond simply entertaining,” says Danny Capozzi, animation director at Aardman. “Being a film about the history of malaria, we wanted it to have a vintage 8mm projector feel but with a unique graphic style that would capture the audience’s attention. The production of the film was very fluid and organic and we added little gags and funny nuances along the way, becoming richer every day.”