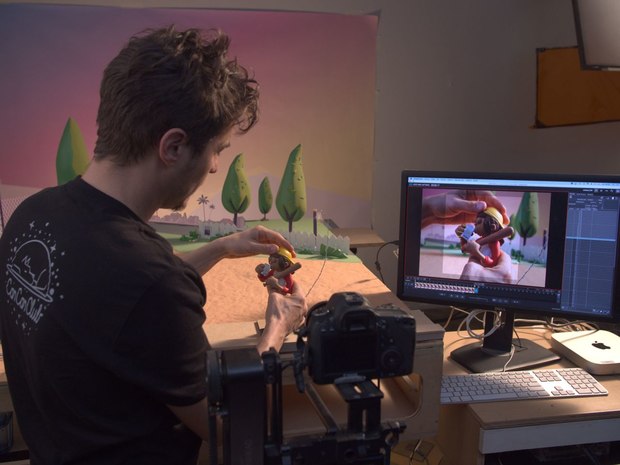 1stAveMachine, the creative studio behind a new “got milk?” series of four stop-motion animated spots, has shared their latest work with AWN.

Produced with the agency of record, Gallegos United, for the California Milk Processor Board, the organization behind the famous milk commercials, the four humorous, 15-second character-driven, clay-animation pieces were created to show the positive impacts of drinking milk.

Each spot focuses on a specific benefit. In one, a fun, goofy handshake between milk and a heart shows that they make a great team. Another features a wrestling match where milk beats the living sauce out of hot sauce to highlight how milk is a good antidote for spicy foods. In a third, a skinny girl knocks down an alien spaceship after drinking a carton of milk, emphasizing how milk improves muscle strength. And, in the fourth, sheep counting meets its match in a night-time glass of milk. The amusing narratives captivate, engage and highlight the benefits of drinking milk through gentle, engaging stop-motion animation and entertaining characters.

The animation was produced by Tronco, with Becho Lo Biaco and Mab Bergara on board as directors as well as stop-motion animators. According to 1stAveMachine executive producer, Peter Repplier, “Becho & Mab were so excited when these scripts came in and jumped on the opportunity to bring these vivid and humorous characters to life. Looking at the spots, it’s really hard to believe they started as mounds of clay!”

All told, from initial project briefing to delivery, the production took about 10 weeks, with around 20 people involved, which included producers, artists, modelers, animators, post producers and directors. Clay was used primarily for the puppets, though tools like Sculpey, resins, 3D printing and paint were also employed. “One really cool aspect of production was how we developed 3D printed cores to rig the limbs of our main characters, as well as tie them to larger rigs that served to hold the whole puppet in position,” Becho & Mab share. “You won’t be able to see this in the animation, but it really became the soul of our main puppets.”

The project came together quickly, because, as fate would have it, many of the artists the studio hoped to use were actually available. “The stars really aligned for us on this project as so many of our beloved artists and friends were available to work with us on it from the beginning -- which is really special,” the directors add. “Whenever we all work together, we reach a kind of mind reading status that elevates our work to new levels.”

Because the animation required especially squishy characters, the puppets were primarily made from clay. “We designed a very cartoony animation with lots of squashy and stretchy movement, so we needed the characters to be mostly clay,” Becho & Mab explain. “And when it came to white clay in particular, things got a bit tricky. This is because we needed to keep it clean from frame to frame, and since white-anything is notoriously easy to get dirty, animation took a bit longer. But we are extremely happy with the outcome, so it was totally worth it! We really enjoyed the process.”

1stAveMachine is known for their work with Google, Apple, and Rag & Bone, among others, and specializes in creative development and production in live-action, animation, mixed media and 360 / VR. Studio Involved:  Can Can Club